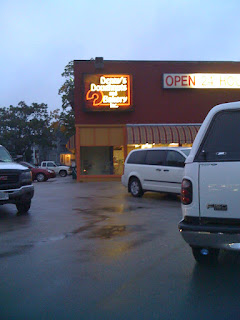 I traveled to Normal, Illinois to participate in a scavenger hunt type race with friends. I asked all over town the day before the race for a donut shop recommendation and only one was ever mentioned, Denny’s Donuts. One lady told me there was no other place to get a donut, end of story. Off to Denny’s it was…

John and I went to Denny’s around 7 in the morning. We chose the Denny’s location in Bloomington and had no problem finding it. There is a large sign outside and the building is sizable. Two sides of the building were glass windows, so we could see inside and noticed they also had a small market with convenience store type items.

Inside Denny’s, several large tables were filled with old guys drinking coffee and having donuts, telling war stories I’m sure. We didn’t have to wait long to get donuts and when I told the lady behind the counter that we wanted eight donuts, she said we should get a box. I like it when the donuts are put in a box, not a bag, but always feel bad asking for a box unless I am buying a full dozen. It was nice of her to offer a box, or maybe she just cares about the donuts enough that she can’t stand the thought of them being smashed in a bag. Yeah, that’s probably what it was. 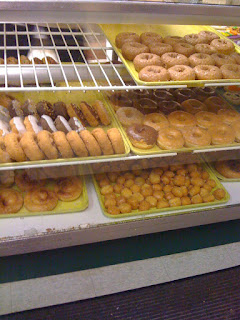 She pointed out to us that they had both pumpkin and apple cider donuts available. We went for both, along with an apple fritter and a chocolate long john. I asked what her favorite donut was and she said it was a Persian and the other lady behind the counter said she liked the filled Persian. We got both along with a couple of other donuts. As we were leaving, John commented that this was the first donut shop he had visited that had an automatic door. I wonder if the building was perhaps a supermarket in a past life?

We brought the box of donuts to the starting area of the race where we met up with four friends also from Kansas City. Our friend Paul was familiar with the Persian donut and explained that it is a coiled donut with cinnamon. I had never heard of this variety of donut and wonder if it is regional? Paul is a donut afficianado and shared stories of delivering papers with his dad when he was a kid and going to the donut shop afterwards. I love hearing people’s tales of donuts. People rarely talk about donuts without smiling. Love that! 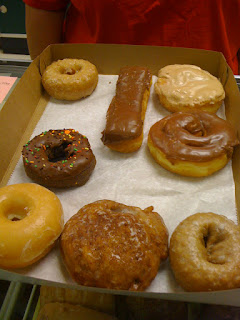 I imposed upon as many of our group as I could with the donuts, but still had a few left and offered them to another team of racers waiting nearby. They took one and told me that they love Denny’s, not just because of the donuts but because Denny is a great guy who supports his local community. And then it was race time…two donuts remained and found a home with race volunteers who didn’t quite share my enthusiasm for fried dough but I suspect they ate them anyway.

I was really happy to find a good, traditional donut shop on this trip. I’ve been stretching to find great place to go on this, the home stretch, of my donut journey. Denny’s was definitely a great place.

The location of Denny’s we visited is at 1107 S. Main Street in Bloomington, Illinois.