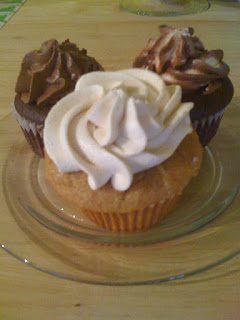 The devastation from the recent earthquake and the seemingly non-stop aftershocks in Haiti saddens me. I wanted to do something to help. Vegan bake sales began popping up all over the country and I decided to join in the fun. A Vegan, Gluten-Free Cupcake sale in Kansas City? Well, why not?

Last year I participated in the Worldwide Vegan Bake Sale with my friend Ginger just a couple of weeks after the whole no-gluten thing happened. It was a tough time for me and I had no idea what, if anything, I could bake. My kitchen started resembling a lab. Exotic flours occupied every inch of countertop and weird thickening agents flew through the air. It was a challenging time, but we did it and raised a good chunk of change for an animal organization. Asking Ginger to join me in the Bake Sale for Haiti was a no-brainer. We had so much fun last year, I couldn’t imagine anyone I would rather bake with. She agreed…and then fell on ice and cracked her tail bone. OUCH!

Our bake sale offerings were limited, chocolate cupcakes with chocolate buttercream frosting and vanilla cupcakes with vanilla bean buttercream frosting. All gluten-free, all vegan. I used cupcake recipes from the Babycakes cookbook by Erin McKenna and frosting recipes from Vegan Cupcakes Take Over the World by Isa Chandra Moskowitz and Terry Hope Romero. Both of these cookbooks are essential in my world.

Even though Ginger wasn’t able to help with the baking, she did the most amazing thing–she sold over 100 cupcakes at her job, matched the funds raised from her own pocket and then her employer matched the funds through their employee match program. We were off to an incredible start with our bake sale!

We announced our bake sale on Thursday, started baking and delivering on Friday and the oven stayed on through Monday evening. The final 3 dozen cupcakes were delivered on Tuesday. 336 cupcakes. Three Hundred Thirty-Six cupcakes, all sold via word of mouth, Facebook and Twitter. A total of $1215.50 was raised for Mercy Corps. It was an amazing experience. 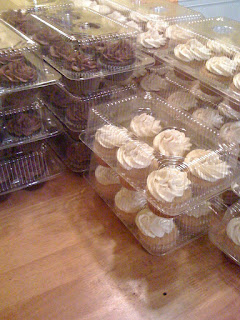 In following the progress of bake sales within the vegan community and the cupcake community (is it weird that both exist AND that both occasionally intertwine for the greater good?), I came across this blog post written by Dana Velden. This paragraph eloquently states how I feel about the bake sale experience:

“In the end, a bake sale’s greatest contribution isn’t just the money raised, it’s also the experience of community and the satisfaction that comes from joining together for a greater good. This takes us beyond the anonymous, individual act of writing a check and into a larger sense of belonging.”

Thanks to all of you that supported the bake sale. I couldn’t have done it without my hubby helping out in the kitchen and with deliveries, my handy mechanical pastry bag from Williams-Sonoma, my friends who are always willing to try whatever I bake even when it is made with bean flour, vanilla bean paste (oh, how I love you…), the new Cosentino’s Price Chopper in Liberty who sold cupcake containers to me and Ginger, who I hope will be my bake sale buddy many more times.

This week’s Sweet Friend is, of course, Ginger. I met Ginger through my personal trainer a couple of years ago. Ginger is vegan but not THAT kind of vegan. I’ve never heard her judge anyone who eats cooked animals and she doesn’t judge me even though I consume dairy and eggs. But there’s much more to Ginger than her veganism…she has a brilliant mind and a job that matches, yet can have a conversation with us normal folks. She loves to read, she makes beautiful crafts and knits masterfully. She adores her husband and plans amazing getaways for just the two of them as well as with his children, who she lovingly stepmothers. I am convinced she will turn the word “stepmother” into a positive word, erasing the negative connotation it too often holds. She protects the Earth vigilently, but just like her veganism, she doesn’t criticize those who do not. But perhaps the thing I adore most about Ginger is her commitment to friendship. She is an amazing friend, the kind who listens and listens and listens more and then succintly offers a bit of input that changes how you look at the world. 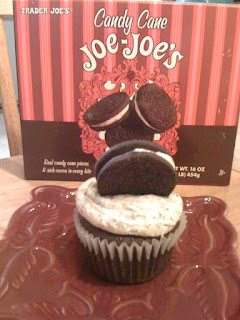 I made a tiny change to a few of the cupcakes to share with Ginger. My hubby hoards boxes of the Trader Joe’s Candy Cane JoeJoe’s but agreed to share a box with me if I would share the end result with him, too. I used the same recipe as the bake sale chocolate cupcakes, vanilla buttercream frosting with crushed up cookies added and topped each cupcake with a whole Candy Cane JoeJoe. JoeJoe’s are like Oreos, only better and during the holidays the Candy Cane variety is offered. While not gluten-free, they are vegan. I miss them. They made fun cupcakes and were reportedly tasty.

Ginger is also a great list-maker. I admire her lists, her way of breaking down huge goals into short checklists as well as her way of making a list of annual achievements seem as big as it really was. Her lists make things seem both large and small, but mostly possible. I hope to one day be a skilled list-maker like Ginger. I’ll give it a go in her honor… 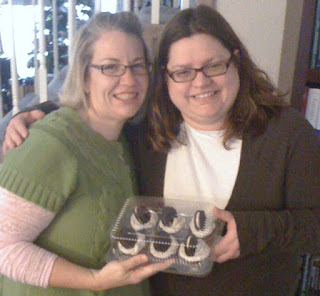 Things I Learned from the Bake Sale for Haiti
1. Vanilla Bean Paste is divine.
2. Three Hundred of anything is A LOT!
3. Gluten-Free baking supplies are expensive.
4. Bake sales can be delivered–a location is not necessary.
5. Vanilla bean paste. Oh, I mentioned that already. Well, it IS that good!
6. Two sets of measuring cups and measuring spoons are essential.
7. Take a break, it will be fun again in a couple of hours.
8. I never want to make cupcakes again…at least not this week.

Thank you again to everyone that participated and supported the bake sale. I’ll say it again…it was an amazing experience. And I love vanilla bean paste. Got it?