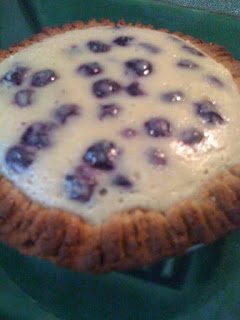 A couple of weeks ago it popped up in conversation with my friend Emily that National Pie Day was coming up soon. It has since passed, but from that conversation I learned that Emily’s favorite pie is Blueberry Custard.

Before making these pies, I had never made or eaten Blueberry Custard pie. In fact, eating blueberries with custard didn’t sound very appealing to me. I found many recipes on-line so apparently Emily isn’t alone in liking this pie!

Sharing a pie seemed difficult so I sought out mini pie pans. I had tartlet pans, but not a traditional pie pan shape in a mini pan. These were not as easy to find locally as I had hoped. After visiting 3 stores, I finally located a set of 4 at Pryde’s for around $6. I’ve got lots of ideas floating around in my head for future use of these cute little pans and can’t understand why every kitchen-y store doesn’t carry them! 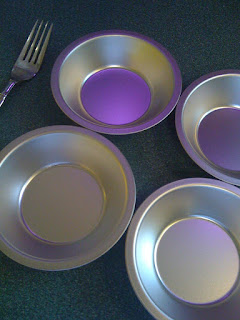 I chose this recipe from CD Kitchen for the filling. I considered a more liquid custard filling, but this dense sour cream based filling worked very well with a gluten-free crust. I have had difficulty in the past with gluten-free pie crusts not crisping up when used with a liquid pie filling.

For the crust, I used the pie crust recipe from the Babycakes NYC cookbook. I am not including the recipe here because it’s in their cookbook, which I think you should buy. Even if you do not eat gluten-free, vegan or refined sugar-free, this cookbook is a treat!

I did modify the pie crust recipe just a bit. The recipe calls for 3 cups of spelt flour, which I do not eat. I substituted 1 1/2 cups Bob’s Red Mill all purpose gluten-free flour mix, 1 cup of almond meal and 1/2 cup of coconut flour. I also used an extra tablespoon of water, since the almond meal made for a very dense dough.

In the mini pie pans, this made four pies with a whole bunch of left over crust. I baked the pies for 25 minutes. I rolled out the leftover crust and cut it in small circles, brushed them with agave nectar and baked for about 8 minutes. The crust made yummy treats, enjoyed immensely by my dogs. 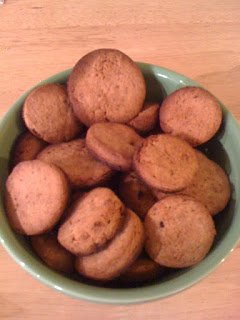 I liked this pie. The flavor was yummy, but would be much better with fresh blueberries. I used frozen. The custard filling is very dense since it is sour cream based. If I were to make these again, I would create pie crust shields with foil, as this pie crust recipe browns very quickly.

This week’s Sweet Friend is Emily. If you followed me on the 52 Donuts journey, you already know Emily is a big fan of donuts. I haven’t counted, but would guess she accompanied me on about a third of my donut adventures.

I met Emily via a car club. See–I do have friends from someplace besides the gym! We were gathered at Manny’s for dinner one evening several years ago. I learned that Emily had recently moved to the same ‘burb as me, relocating here from Boston. It quickly came up in conversation that she missed Dunkin’ Donuts. It took less than 30 minutes for us to figure out we both liked donuts, small European cars of many varities, long lunches at tiny local establishments and hanging out in the kitchen–whether at our own house or someone else’s.

Emily is an adventurous eater and enjoys cooking the way I enjoy baking. She and her SO host legendary hot dog and hamburger competitions where the guests each create their own themed entry and collectively determine a winner. I think Emily is the current trophy holder with her Gyro Dog. It is going to be hard to top it, but I am already plotting for this Summer’s competition.

When I delivered pies to Emily this evening, she had just returned from a tennis match. She’s still sporting a major scrape from a tennis brawl two weeks ago. Only Emily could turn tennis into a full contact sport. I will gladly make pie for someone like that any day! 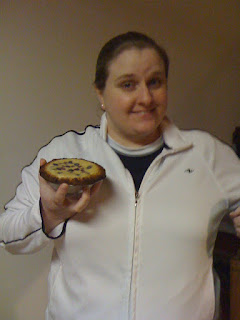