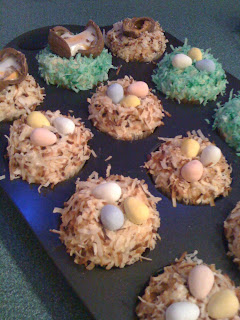 With Mother Nature teasing of Spring’s arrival, I wanted to bake something that made me think of Spring.  Not necessarily Easter, but Spring…like baby chicks, coconut nests and gooey filled chocolate eggs.  My first idea was to use the Russell Stover coconut nests to top cupcakes, however when I went shopping I discovered their coconut nests no longer have jelly bean eggs.  Is this due to the recession?  Is the economy THAT bad over at the chocolate factory?  In protest, I decided I would not use the only candy I remember from my childhood Easter baskets, at least not until they put three jelly beans back into the coconut nest.  The alternative was the Cadbury Egg.

I had never tried a Cadbury Egg before.  Easter candy wasn’t high on my parents list, baskets were usually filled with such dreadful items as books and trinkets.  But every year I knew there would be one piece of candy, a chocolate coconut nest, presumably from the local Russell Stover proprietor, Jim’s Rexall.  In a small town, there wasn’t much to choose from gift-wise, but it was always a treat to get a box of Russell Stover chocolates as a gift on any occasion.  A lovely lady worked at the store that did the most amazing gift wrapping.  I don’t even recall them selling Cadbury eggs but perhaps they did.

Oh, the eggs…sidetracked for a moment reminiscing about drugstore chocolate.  My husband said he had eaten a Cadbury egg before.  He told me the inside was runny.  I remembered TV commercials with bunnies advertising these eggs and it seemed they showed a runny filling.  Okay, I can work with runny.  So I went to buy them and discovered two sizes, one chicken egg sized and one much smaller.  I bought both and brought them home to taste-test, expecting them to create a runny mess.  There was no runny mess inside.  It wasn’t as runny as my hubby remembered and another friend said they used to have a filling like a cherry cordial.  I don’t know if they have in fact changed the filling or if memories from childhood are starting to fade for my friends.

I decided to use the Cadbury eggs in cupcakes and modified this recipe from Curious Cupcakes.  My modifications to the White Velvet Butter Cake recipe were as follows:
1.  I used 5 egg whites (I think eggs help gluten-free baked goods stick together better)
2.  I increased the vanilla to 1 Tablespoon and used vanilla bean paste instead of extract
3.  For flour, I used 1 cup white rice flour, 1 cup brown rice flour and 1 cup potato starch
4.  I added 1 teaspoon xanthan gum 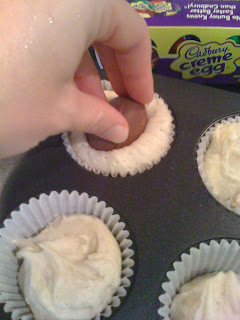 I stuck a few of the large Cadbury eggs in the batter but realized they were about as deep as the wells in my cupcake pan so decided instead to use the smaller size in the majority of the cupcakes.  I found it interesting that even at 350 degrees, the eggs appeared to maintain their shape in the batter.  What’s in those eggs anyway?  Oh, never mind.  I’d rather not know.

This batter smelled delicious before it was baked.  I couldn’t wait to try this and didn’t…I ate one warm, right out of the oven before frosting had even been pondered.  This recipe is divine.  Thanks, Curious Cupcakes, for sharing this one.  I plan to use this recipe again as a foundation for other vanilla-based cupcake recipes.  It worked well with gluten removed and has a very dense, spongy texture.  And it’s just delicious.  Isn’t that enough?

Mix the first three ingredients together, slowly add in the milk.  Sometimes one tablespoon is enough, other times I add a second.  It simply depends how stiff the frosting needs to be for the project at hand.  This week I used only 1 tablespoon, as I planned to do basic knife frosting of the cupcakes.  When I use the frosting gun gizmo from Williams-Sonoma, I like the frosting a little less stiff and will add more milk. 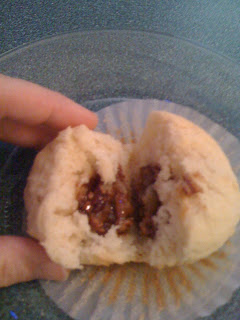 I toasted coconut to roll these cupcakes in after they were frosted.  There is something therapeutic about toasting coconut in a large skilled on top of the stove.  It’s not a task you can turn your back on and it goes from white to over-toasted (as in burnt) very quickly.  But I really enjoy doing it.  Coconut and I have become great friends lately.  You’ve not heard the last of this wondrous food yet.

I also used food coloring to make some coconut “grass” for some of the cupcakes, but like how the toasted coconut topped cupcakes turned out much better.  The flavor of toasted coconut goes very well with the White Velvet cake.

Topping the cupcakes were a couple of options:  I used the remaining large Cadbury eggs to top a few of the cupcakes.  I cracked them open and left the gooey inside exposed.  I wouldn’t do it again but this week’s Sweet Friend has children and I thought they would like them.  The others I topped with Cadbury’s chocolate eggs with a candy shell.  Another Easter candy I had never tried!  I like the chocolate eggs with a candy shell much better than the Cadbury eggs.

About those Cadbury eggs:  I thought they were disgustingly sweet.  I know, I know, I write about SWEET treats every week.  But these were just too much.  Or so I thought until I stuck them in cake batter and baked them.  Suddenly they became exquisite.  All I can compare this flavor upgrade to is a deep fried Twinkie.  Never a fan of Twinkies, I had one deep fried and found it to be insanely yummy.  The cream filling was somehow like a French pastry cream and the indestructible cake part of the Twinkie….well, it was just a pleasant surprise.  Same with the Cadbury eggs.  The filling crystallized in some of the cupcakes, but remained a little runny in others.  In all of them, it was a tasty surprise, a little chocolate-y goodness tucked inside delicious white cake. 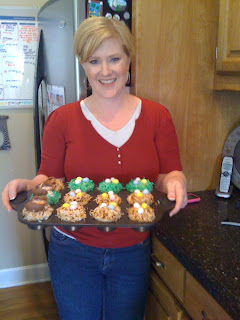 This week’s Sweet Friend is Jodi.   I have known Jodi for a couple of years now.  We met in a group exercise class and have had lots of giggles together.

Jodi is an amazing woman.  She is the mom of SIX children yet I’ve never seen her stressed.  I recently commented to her husband that she could have an entire busload of children in her presence and each one of them would behave, use their manners and be having a great time.  How she does it I will never know.  I stand in awe.

Last Summer Jodi decided to compete in her first triathlon.  That’s challenge enough for most of us, but Jodi decided to take her entire family along.  How awesome is that?!?  Her kids did the triathlon, too.  Where would we be today if more families did things like this together? That Jamie Oliver fella might not have his new TV show.

Last fall my husband and I competed in an urban adventure race on a team with Jodi, her husband and her two teenage sons.  There was no bickering, no whining from her kids, just a really great time.  You can imagine the trepidation from me, childless and usually a solo race participant, as I considered spending the day with *gasp* teenagers! Even though it was very cold, rainy and we were hours from home, everyone had a terrific time. I have a hard time picturing anything being un-fun when Jodi is along.

I hope later this year to share a little bit with you about Jodi’s cookie skills.  For my dog Izzy’s first birthday parties, Jodi made the most adorable cookies.  She is a master of flow-over frosting!  We had talked about the color scheme for the party and the cookies were perfect–including the plaid dog bone shaped cookies.  Yep, plaid.  She really IS a master with the frosting.  I am hoping to convince her to share her frosting secrets with me…I’ve got a terrific gluten-free sugar cookie recipe lined up!