I know, I know…my 52 weeks is up.  I’ve visited more than 52 unique donut shops in 11 states but still can’t get rid of the Donut Bug.  On April 3rd Jasper Mirabile talked about coffee and donuts on his radio show and I realized I was seriously missing donut adventures!  (I also think I would have been a better choice to interview about donuts than the guy from Bon Appetit who went on and on about Voodoo Donuts and either has limited knowledge or didn’t clearly express his knowledge about the donut industry and the boutique nature of shops popping up all over the country. But that’s not my point…) 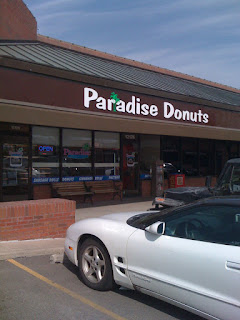 Easter Sunday, the very next day, seemed like a good day to hunt for donuts.  I had heard a new location of the Paradise Donuts chain had opened in Lenexa and headed out with John to check it out.    This strip mall location has a donut legacy.  It was a Lamar’s years ago and most recently was Steve’s Donuts. Apparently it is destined to be a donut shop!

I had never been to a Paradise Donuts outside of Tulsa.  In Tulsa, there seems to be a Paradise on every other corner, almost like Dunkin’ Donuts in Boston and Chicago.  But in all of the ones I visited in Tulsa two years ago, it was obvious that each location was it’s own unique and locally-owned small business.  I went to one not far from the zoo in Tulsa and was greeted by both a husband and a wife, two smiling little faces both sticking out of the drive-thru window to tell me all they had left for the day was donut holes.  A bit odd, but cute and the donut holes were delicious! 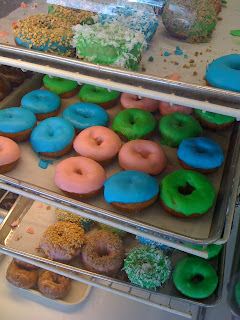 The Lenexa location doesn’t have any inside seating, but there are a couple of sidewalk benches in front.  I am guessing since it was Easter, very brightly frosted donuts dominated the bakery case.  I’m still unsure of the blue frosting, but the other colors weren’t totally unappealing.

John picked a hefty box of donuts for himself, something I didn’t think I would ever see again.  After months of being my unofficial taste tester, I thought he would take a lengthy break from donuts, maybe never eat them again.  Not so!

In the box of goodies John picked was a donut that looked like a cinnamon roll that had been pushed through one of the Bloomin’ Onion As-Seen-On-TV gizmos.  I believe the girl behind the counter called it a porcupine.   I asked how it was made and she said each was cut by hand with a knife.  I’d like to see these made!

John apparently enjoyed the donuts, as there were no leftovers by mid-day.  Now that I know he is open to more taste-testing, I may seek out a few other KC donut happenings in the next few months in addition to baking for the 52 Sweets project. 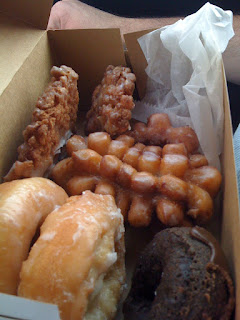