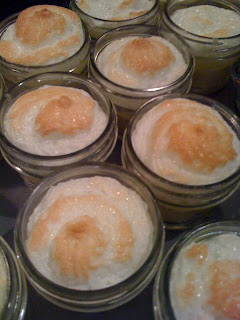 I spend far too much time browsing food blogs, searching for recipes that are gluten-free or recipes that I can de-gluten. (Is that a word?  De-gluten?) I have read several blog entries lately on baking in jars and am absolutely fascinated!

What is it about baking in a jar that fascinates me? I like that it makes single servings, that they are in tidy little containers which makes delivery and sharing convenient and they are just cute.  Okay, more than cute.  I think they are adorable.  I want one in my lunch every single day, a tiny little dessert in its own pretty jar all for me. The biggest challenge I have confronted on this year’s 52 journey is eating only one serving of the week’s sweet.  With 52 Donuts, it was easier to moderate my intake by only buying what I allotted myself.  Not so with baking an entire batch of a delectable treat…but baking in a jar made that much easier!

This week’s sweet is Lemon Meringue Pie-in-a-Jar and here’s the recipe along with notes on how I assembled and baked these.

You will need approximately 20 4-ounce wide mouth jelly jars.  I bought mine at the local mom-and-pop hardware store which has canning supplies available year round.  I used this style of jar and they cost around $1 a jar, which, for me, means I want to share with folks who I see often enough to get my jars back.

Mix flour, salt and sugar together.  I do not sift the rice flour blend, however if you were substituting all-purpose flour, I would sift.  Add Crisco and break up with a pastry cutter.  Next add the butter and mix with pastry cutter.  Begin adding the cold water, just a little at a time until you reach the texture of pie crust dough.

Use a 2 1/2″ biscuit cutter to cut rounds of crust and gently insert one into each jar.  Alternately, you could press pieces of the dough into the jar, however I found it easier to maintain a consistent thickness of crust by cutting out rounds and gently folding them into the jar.  Prick the crust with a fork a few times or use pie weights if you prefer.

Place the jars on a cookie sheet and bake the crust at 325 for approximately 15 minutes.  I would typically bake crust at a higher temperature, however I was slightly leary of baking in canning jars so kept the temperature just a little lower and cooked a few minutes longer than with a typical crust.  Remove from oven and set aside to cool. (These will not brown like a typical gluten pie crust, but do get a nice touch of color when they are done.)

Lemon Pie Filling and Meringue
I used this recipe from Alton Brown for the pie filling and meringue.  The only adjustment was to reduce the baking temperature to 325 and cook them for 17-19 minutes.  I used a mechanical pastry bag to pipe the meringue on top of the lemon filling but am not completely pleased with the result.  I need to practice with meringue a bit more to figure out what works best to get it into itty bitty jars.  There were quite a few negative reviews of this recipe, however I thought it worked well.  Many folks reported the filling was soupy.  I did cook for quite a bit longer than the recipe indicated, just to make sure it was plenty thick.  It turned out great! 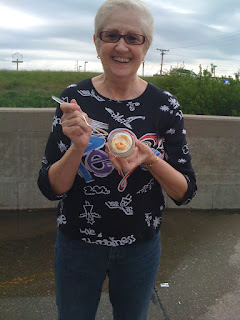 This week’s sweet friend is Charlotte.  I asked Charlotte’s husband David what her favorite pie flavor was and he first said Lemon Chiffon and then said French Silk.  I stuck with Lemon, but not the Chiffon part as I couldn’t find a recipe that didn’t use gelatin, which I don’t use.  I shared the treats with Charlotte while on a roadtrip with 12 friends.  These were a great dessert to share while on the road.  They traveled well in a cooler, which a regular pie would not have. The only thing I would have done differently is not shared them after a HUGE lunch at Lambert’s.  One meal at that place is enough food for a reasonable person to eat for an entire week!

I wrote a bit about Charlottte on the 52 Foods On A Stick blog and mentioned what an amazing knitter she is.  Last year I showed Charlotte a photo of knitted fruit jackets that I thought were fun.  The next time I saw her, she had an apple and a pear jacket for me.  She knitted these with no pattern!  I am amazed at her knitting abilities.  I use these fruit jackets often, especially when I am traveling.  They are just great, like Charlotte!
(The part of Pear is being played by Orange this week.) 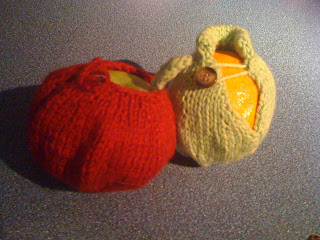