National Donut Day was on June 4th this year.  I was in Fayetteville, Arkansas, which gave me the opportunity to seek out a new donut shop.  I asked the locals and found that most of them recommended either the Daylight Donuts closest to their home or on the way to work OR they suggested Rick’s Bakery.

In my donut journeys, there haven’t been too many bakeries, mostly shops that specialize in donuts.  I would still rather go to a bakery for donuts than to a chain I’ve visited numerous times, so I headed to Rick’s Bakery with my husband John, bikes in tow for a ride on the nearby trail. 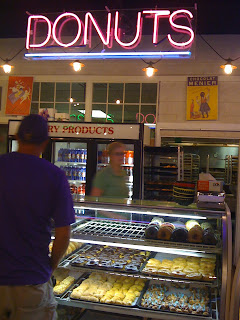 Rick’s Bakery is HUGE.  It consumes most of a strip mall in Fayetteville.  Two huge delivery vans were waiting to be loaded with deliveries and a steady flow of people were entering through the front door.  To the right of the front entrance was the wedding cake area, where many cakes were on display in the windows and bakery cases.  Straight ahead was the donut case, the only place where there was a line.  A huge neon DONUTS sign was over the case.  A fresh orange juice machine that works with whole oranges, similar to one I saw at a farmer’s market in St. Petersburg, Florida, was near the donut case.  Strange combination, orange juice and donuts, but a delicious offering! To the left was a gift shop area filled with cute aprons, everything imaginable with a cupcake on it, cute gifts, partyware…everything you might need to go with a cake! Beyond the gift shop was a small counter with seating and huge windows into the cake decorating area. 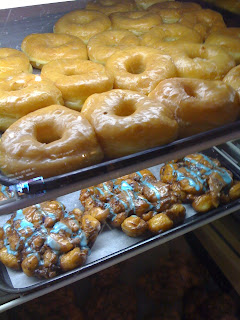 We picked out donuts for John’s breakfast, a blueberry fritter, a glazed donut and a chocolate cake donut.  I got a hunk of peanut butter fudge.  We grabbed a couple of stools and had a great breakfast watching 6 or 7 gals decorating cakes, cupcakes and cookies.  I saw Arkansas Razorback cupcakes with cartoon-y pig face, a 3-D dinosaur cake, airbrushed sugar cookies, the St. Louis Arch in pieces drying in either fondant or modeling chocolate…this was by far the best view I’ve ever had at a donut shop!  I could have sat at the counter for hours watching the cake decorators work.  It was like being in the studio audience at Ace of Cakes, except without any audio. 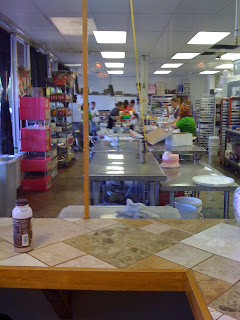 A local told me that Rick from Rick’s Bakery was on a Food Network Challenge.  I didn’t get the chance to ask anyone in the bakery for the scoop (they were busy, busy, busy folks!) but do not doubt it.  The cakes were amazing, many very whimsical, and if the number of people picking up cakes on a Friday morning is any indicator, they must taste good!

About the donuts…John wasn’t tickled with the neon blue frosting drizzle on his blueberry fritter.  I understand it being used to differentiate between the apple and blueberry fritters, but it was a very artificial color.  The fritter had visible blueberries in it but John said there wasn’t much blueberry flavor.  He’d rather have an apple fritter.  The glazed donut was basic, but good.  The cake donut was the best of the 3 donuts he tried and he said he would definitely eat their donuts again should he be in Fayetteville, Arkansas.

I struck up a conversation with a little guy, probably about 5 years old, also sitting at the cake decorating counter, and asked what his favorite donut was at Rick’s.  He confidently told me the donut holes are the BEST!  I asked what flavor donut hole he prefers and was told they don’t come in flavors, but you do get six donut holes instead of just one donut.  I like this kid’s thinking!

Powered by donuts and peanut butter fudge, we headed off to ride Fayetteville’s extensive bike trail system for a couple of hours before going to work.  This was our opportunity to celebrate the next day’s holiday, National Trails Day, a day early.  The sugar rush lasted long enough for us to check out a good bit of Fayetteville, which is really a nice little city.  If you find yourself here, go visit Rick’s Bakery and allow enough time to grab a seat and watch the talented folks decorating cakes and cookies.  What a fun place!

« Food on a Stick #2 and #3, Cheeseburger on a Stick, Caramel Apple
Sweet of the Week #23, Strawberry Surprise Angel Food Cake with Lee »