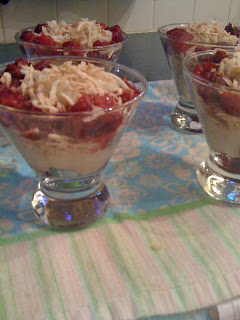 Remember that recipe contest I entered?  Well, I got my first box of prize goodies this week and it contained a package of Udi’s Lemon Streusel Muffins.  They are the kind of delicious that prevent them from staying long in my house.  I can’t eat just one, even freezing them doesn’t prevent me from eating them.  They are a combination of a lemon bar, pound cake, crumbly coffee cake and the best muffin you’ll ever eat.

I had to come up with something to do with these muffins!  I also had a pint of raspberries left from the berry picking adventure at Lawson Brothers Farm.  I love raspberry and lemon together, such a great combination of tart and sweet.  I also added a touch of coconut because I think it works well with both flavors and I was craving it. I decided to make a trifle of sorts, only in single serve portions so I could share with a friend.

In a medium saucepan, add lightly beaten egg, cornstarch and sugar.  Mix thoroughly.  Add milk a little at a time.  Add butter and vanilla bean paste and cook over low heat.  This requires constant stirring until it begins to thicken.  It took mine about 20 minutes to reach a thicker consistency.  Cool before using in trifle.

This week’s Sweet Friend is Courtney.  She is the first person for whom I baked anything gluten-free.  My neighbor Marquetta was the first person I met with Celiac disease, but before I had the chance to bake for her, Courtney’s nursing school graduation party happened.  Emily and Brett were hosting the party and I asked what I could bring.  Emily, knowing that I love to bake, told me that Courtney didn’t eat gluten so it might be tricky but I could give it a try.  I went to the store and bought a gluten-free brownie mix (gasp!)and they turned out well, no harder than baking any other brownies from a mix.  They smelled good, looked good and with that, I was off to the party! 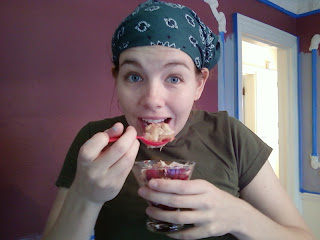 In a way that I can only understand now, Courtney was giddy about those brownies from a mix.  Unlike me, only having spent a year gluten-free, she’s spent most of her life avoiding the sweets and breads at parties, even those thrown in her honor.  It really does mean a lot when someone bakes something of which we can indulge, even if it’s brownies from a mix.

There’s much more to Courtney though than this minor annoyance of eating gluten-free.  She’s a nurse, a roller derby girl, a runner, soon to be triathlete, bride-to-be, international traveler and student, new homeowner, and all around fun to be with friend.  If she has many cranky days, she does a good job hiding it.  Always on the go, always with a smile, always fun to be around.  And someone with whom I’m always glad to share the gluten-free goodies.

« Sweet of the Week #24, Raspberry Coffee Cake in a Jar with Laurie
Waffle on a Stick! »