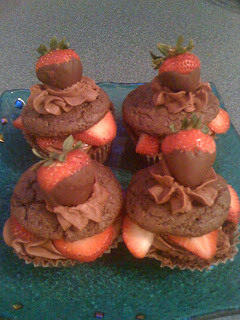 This week’s Sweet Treat, Chocolate Strawberry Cupcakes, was inspired by Chef Chloe, a vegan chef who recently won on an episode of Cupcake Wars.

While it isn’t something I get to do often, Emily and Sheila came over on Tuesday evening and amongst the chatter and giggling of our Girls Night In, we watched an episode of Cupcake Wars.  I watch far too much food TV, but Cupcake Wars isn’t a show I usually watch. My schedule doesn’t often allow, I don’t have a DVR and well, I’m not that interested in the drama.  But the recipes, well, yes!  I’m very interested in the recipes!  And when I heard one of the competitors was featuring vegan cupcakes, I was beyond interested!

I made these cupcakes with a couple of changes.  (Sorry, you will have to scroll down the blog for the recipe, there is no direct link to the post with this recipe. Watch for Chocolate Strawberry Shortcake Cupcakes.) First I replaced the flour with my gluten-free flour blend and added 1 teaspoon of xanthan gum.  Second, I made a chocolate buttercream frosting instead of the white buttercream.  I reduced the powdered sugar in the frosting by 1/2 cup and added 1/2 cup Askinosie cocoa powder. For a little extra pizazz, I topped each cupcake with a chocolate dipped strawberry, using Askinosie’s 77% Davao dark chocolate bar.

These cupcakes were quite tasty, however within minutes of taking them out of the oven, the cupcake paper was pulling away from the cake.  I also had difficulty slicing the top off of the cupcake in one piece, several of them fell into many pieces instead.  I do not blame Chef Chloe’s recipe for this, it very well could be a result of eliminating gluten from the recipe.  It is much more difficult to de-gluten a vegan recipe than one that contains eggs, in my experience.  This was my best attempt so far and they were delicious, just not as sturdy as I would have liked. The frosting was dense, however that was probably because of the large amount of cocoa powder I used.  I used coconut oil in the frosting and don’t think I’ll do that again.  Tasty yes, but not mooshy enough to firmly anchor the strawberries. A fork was necessary to eat these. 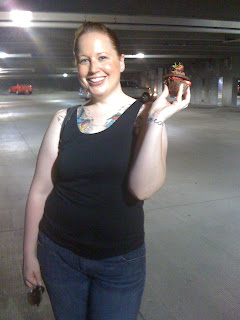 This week’s Sweet Friend is Dianna.  We met through a car club.  You’ve probably noticed this trend with my Sweet Friends and it may sound like I spend a lot of time with my car, which I don’t. But I have met a lot of folks through the car club who are pretty darned fun to hang out with–and not just at car things.  It just so happens that a car manufacturer so perfectly nailed their demographic that I’ve met many people with common interests and lifestyles. Perhaps that makes us sadly predictable, but it also has made for lots of fun and great friends.

Dianna is always down for a great concert, a baseball game, vegetarian food, anything that’s fun!  She was a Chick-on-a-Bike before it was a fairly common sighting. She’s a dog mom to massive Mastiffs.  She drives a tiny car and has huge dogs.  How great is that?  One year she dressed her tiny car up as a Converse sneaker for a Halloween party.  I  love her quirky sense of humor!

There’s an amazing quality about Dianna that I have contemplated writing about all week.  I’m not sure how to best explain it without divulging too much.  I’m so impressed with how Dianna has handled a major change in her life.  That’s all I’ve decided to say about that.  It’s super to have such strong friends who also know how to have a really good time.  And that’s Dianna!

« Waffle on a Stick!
Meet My Friends: Mark »