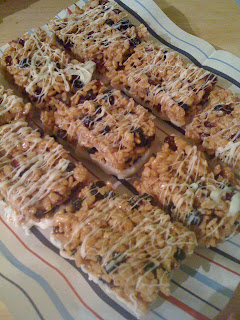 Red, White and Blue Krispie Treats
Inspired by a cranberry rice krispie treat mentioned on David Lebovitz’s blog, from Merce and the Muse in Paris.

What follows is my variation of the traditional Rice Krispie treat.  Once rescued from near-failure, they turned out very tasty.

Melt margarine in a small saucepan, add ricemellow creme once margarine is melted.  Stir until well blended and smooth.

In a large bowl, combine Craisins, dried blueberries and cereal.  Using a rubber spatula, mix warm margarine and ricemellow into cereal mixture.  Press into a 9″ x 13″ pan.  Chill until set.

Melt 3/4 of one bag of candy melts in microwave according to package instructions.  Pour over the top of krispie treats and spread to evenly cover entire surface.  Chill again until white chocolate is set.

Cut bars into single serving size pieces–for me, that meant 12 pieces but you pick the size that works for you. Invert bars and either place them back in the pan or on a cookie sheet.

Melt remaining 1/4 bag of candy melts in microwave according to package instruction.  Drizzle over the top side of the krispie treats. Chill again to set white chocolate drizzle.

This week’s Sweet Friend is a Sweet Family, the Weavers.  I only get to see them about once a year and won’t have the opportunity to make a sweet for each of them so this week I’m writing about a whole family of friends. While I am excited to write about one of my favorite families, I’m bummed that I won’t get to make something yummy for each of them.  I’d sure like to do that! 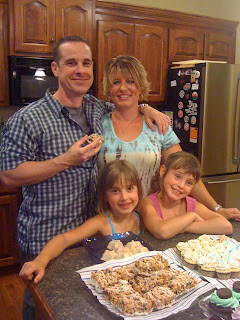 I met the Weavers because of that funny little car I drive (I know, it’s a pattern.  I’ll move on from car friends soon, promise).  The military moved them to our area and we hung out until they were moved halfway across the country.  Now we see each other on abbreviated vacations where there is always food and lots of laughter.

First, I should tell you about the two little cuties in the picture. If all kids were this much fun, I’d have a houseful.  Well, not really, but my point is that they are really enjoyable to be around.  Creative, independent, yet super silly, each unique with her own talents.  It’s fun to be around such nice girls.

The girls have a mom who is just as nice.  Patricia is a true Kentucky gal and always fun to be around.  Even when her hubby was deployed, she remained positive.  The woman is a rock!  Never once did I hear her complain about the added stress and responsibility of being alone in a new place with two kids and no husband.  Via the magical interwebs, she selected a washer and dryer with her husband’s input from Iraq.  Life went on as normally as possible.  And then a second deployment and she held it together again, this time in another new place.  If you asked how she did it, she would probably tell you something like, “Well, we’re a military family.  This is just what we do.”  And in the next breath, she would be talking about purses.  Love that.

Completing this terrific family is Seth.  Career military man with a fancy job title, Seth is also a hoot to be around.  I’m not sure the military appreciates his humor, perhaps tolerates is more like it. The night I delivered these sweet treats we laughed so much my ribs hurt the next day.  While the military is obviously important to him, it’s never stopped him from laughing, enjoying a great local beer or driving a zippy little car skillfully around skunks with a death wish.   I can only imagine how hard it is to be away from your family during multiple deployments but I didn’t hear much complaining.  Maybe a little teasing when I would complain about the heat here though. And like his wife, he seemed to navigate being away from home quite skillfully, even sending her flowers while deployed.  Well played!

I wish I were more eloquent and could find the words to share with you how incredible this family is.  I know it hasn’t been easy for them with two deployments, a medical issue or two, all that comes with raising kids…but you’d never know it.  They make life look like fun, even during times when it simply can’t be fun.  I admire them for that!

« Food on a Stick #5, Fried Cheesecake on a Stick with Becky
Sweet of the Week #28, Almost Linzer Cookies with Christina »