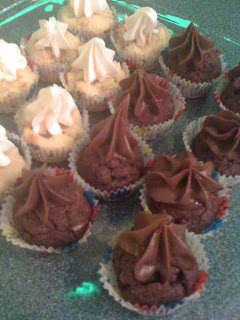 Baking for friends who are diabetic or who watch their sugar intake for other reasons has been a challenge for me.  Emily spotted this adorable Mini Cupcake Maker, which is sort of like a George Foreman grill or waffle iron that bakes 7 mini cupcakes in 10 minutes, and it came with a cookbook full of interesting recipes, including several low-sugar recipes. I modified a couple of recipes to be even lower-sugar and gluten-free.

The mini cupcake oven is an interesting kitchen gadget.  I’ve used it a few times now and while I like having only 7 mini cupcakes or muffins at a time, it does leave a lot of batter left over if you only make 7.  If you use all of the batter in a recipe, you will spend considerable time baking, as you will have to bake multiple “loads” in the mini oven.  These recipes work just as well in a mini muffin tin in the regular oven at 350 degrees. 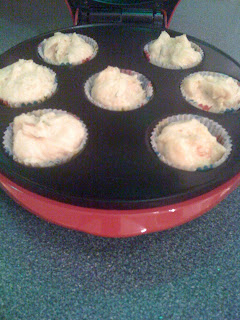 1.  Combine and mix all ingredients in a medium bowl.
2.  Fill each of the cupcake molds (I used mini cupcake papers) with 1 heaping teaspoon of batter.
3.  Cook 10 to 12 minutes.

I frosted these with reduced sugar frosting in a can (gasp!) and would not do that again.  It had a very strange texture, very oily, and did not easily wash off of my hands.  You know how frosting usually kinda melts when exposed to warm or hot water?  This stuff does not, which makes me think I probably shouldn’t eat it.  Next time I will try to make my own frosting when baking low-sugar or sugar-free.

You may have noticed I’ve been slow in posting lately.  I lost my writing motivation for a bit, avoiding writing this post because it was still very emotional  for me.  So here goes… 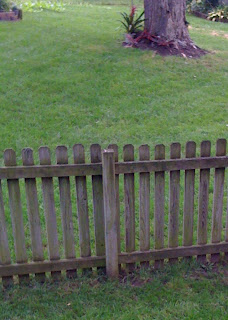 Five years ago, my husband and I purchased our first home.  None of the neighbors came calling with pies or plates of cookies to welcome us to the neighborhood, but the bib overall-wearing guy next door did greet me with a booming, “Howdy neighbor!” within the first week.

Our first conversation was about moles.  We had lumps in our front yard.  Lonnie, the bib overall-wearing guy, told me I needed to do something about that.  When I asked what exactly I should do, he told me I should buy peanuts, not just regular peanuts but special peanuts made to kill moles.  I told him I would not be putting anything on my lawn that killed an animal.  He just shook his head and went about his business.  I was not doing a very good job at concealing the liberal, animal loving side of myself and worried that, like the old neighborhood, we’d quickly be labeled the eccentric ones.

I went about finding an alternative to get rid of these moles.  I found a spray that said it would make the moles skin itch and they would dislike the itching so much that they would go away.  The label neglected to mention that “away” would mean your next door neighbor’s lawn.

The next time I saw Lonnie, he told me the moles had relocated to his lawn.  “You and me girl, we’re gonna get something started here, an Adopt-a-Mole program.  If you object to killing ’em,  I’m gonna trap ’em and you’re gonna find ’em new homes.” It was the beginning of a friendship, of knowing we had good neighbors and were headed on a learning journey about home ownership, gardening, farming…

Lonnie was trapping something at his house, not moles but squirrels!  On the far side of his house, he had a trap set up to catch squirrels and would then release them at his farm (or so he told me).  When our youngest dog was a puppy, we lost her outside while working in the yard.  We called and called for her but she wouldn’t come.  We started walking the neighborhood looking for her, worry starting to set in because she’s a bit goofy and probably wouldn’t know the way home if she wandered too far.  Turns out she hadn’t wandered far at all, she was in Lonnie’s squirrel trap, just sitting there quietly.  My husband had to knock on Lonnie’s door and get his help to release our dog from the trap.  For the next couple of months, every time he saw our puppy, he would say, “There’s MY dog!  I caught her, she’s mine fair and square!”

Every morning, at an hour I consider early, I would hear Lonnie’s diesel Ford F-350 truck fire up. At first I was bothered by it, then it became my wake up call.  He was up with the sun, heading to his farm outside of town to tend his cattle.  Over our adjoining backyard fence, I would often ask how the cows were.  In the Spring, I would ask about the calves.  Lonnie told me on several occasions that I could not meet the calves because I would want to bring one home.  Boy, he had my number!

Over the fence, Lonnie taught me about raised bed gardening.  He gently encouraged me when to plant tomatoes, what to amend the soil with and that I was planting my “fancy soybeans” (edamame) too late.  Turns out he had a great deal of knowledge about soybeans.  He had farmed them for years and also had seen tofu being made while serving in the Army in Vietnam.  He knew more about tofu than I do–and I’m vegetarian. He was right about my edamame, I planted too late and the first freeze fell before they were ready to pick.

Recently, I became a backyard chicken keeper.  My husband built a terrific chicken run, we had a coop made from recycled construction scrap and three hens came to live in our yard.  And then I panicked.  What if the book on raising chickens made it sound easier than it really is?  Was I really cut out for this? Lonnie to the rescue!  Everyday for the first few weeks he encouraged me that we were doing just fine.  Watermelon was tossed over the fence for the hens to eat and much fence-leaning was done by Lonnie as he watched our hens wander around the yard.  He offered to get laying mash for the hens to eat when he stopped at the farm store. He also shared with me that one trip to a factory chicken farm in Arkansas had about turned him off of eating chicken.  “It’s just downright disgusting and that’s not how you raise an animal.”  And so I discovered that the cattle farmer and the vegetarian had very similar views on humanely raising farm animals, even if our eating habits differ.

I made the reduced sugar cupcakes for Lonnie’s birthday.  When I took them to his house, his lovely wife Janey met me at the door and said Lonnie had gone to the lake and she joked he wouldn’t be home before she ate all of the cupcakes.  I went out of town to work the next day and didn’t see Lonnie for another week or so.  The next time we were both at home, I hollered over the fence that we were leaving again soon to work in Kentucky.  He told me that is where his kin are from, that he is certified hillbilly.  Lots of jokes from Lonnie. I forgot to ask if he had any of the cupcakes.

While working in Kentucky, my phone rang early in the morning, at about the hour I would hear the rattling of Lonnie’s diesel pick-up truck if I were home.  It was Janey and something was wrong.  Thoughts were immediately spinning through my head…was something wrong with our house?  Did something get into the chickens?  Oh, but it was worse.  So much worse that it wasn’t even a thought that entered my head.  Lonnie had been killed the day before in a farming accident.

Janey was insistent that I should not come home, but I wanted to.  It’s what a good neighbor and friend would do.  But I also had a work commitment that was very time sensitive so I called my friend Sheila and asked her for support.  She quickly headed over to see Janey.  I let our chicken-sitter know what was happening, there would surely be extra traffic around our house.  Our chicken-sitter, who was never properly introduced to Janey or Lonnie expressed great concern about Janey and asked if I thought it would be weird to drop by to give Janey a hug, because she surely need one or a hundred. Sheila called often to let me know what was going on, to tell me she had checked in with Janey.  Even in Lonnie’s death he continued teaching me, this time about the value of having really great friends and neighbors.

Lonnie’s funeral was a combination of sadness (a life cut short) and celebration (a life well-lived).  My husband let out a quiet chuckle as we entered the funeral home, seeing Lonnie in the casket in his bib overalls and Orrick Farm Service hat. Nothing pretentious about it, Lonnie was just what he was.  Here’s to a life well-lived, a man well-loved and much-missed.