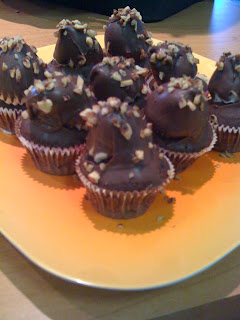 My real job took me out of town a lot of the past couple of months.  I’m behind posting Sweet Treats, but haven’t missed an opportunity while out of town to create something yummy every week and share it with a friend, even if it meant baking in a hotel room.

What a set of challenges hotel room baking brings!  While working in Kentucky, I stayed at a long-term stay hotel and chose the location solely because the rooms offered an oven, as opposed to the usual cooktop-only situation.  I packed my essential baking gear: cupcake pan, mini cupcake oven, cupcake papers, vanilla bean paste, a stash of good chocolate…everything I thought a minimally equipped kitchen would not have.  I was wrong.  There were no measuring cups nor spoons, no cookie sheet, no bowl larger than a cereal bowl, no spatula, no pot holders and no consistently heated oven.  A trip to the well-stocked Kroger store fixed most of my problems, but waiting 35 minutes for an oven to heat to 350 degrees took some adjusting! 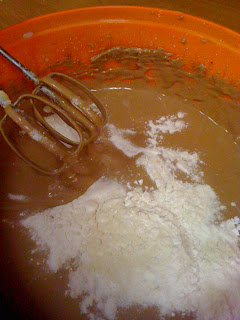 It only took three attempts, three batches of cake batter mixed in a Halloween candy bowl in lieu of a proper mixing bowl,  to get this Sweet worked out.  The first attempt didn’t work because the oven refused to stay at 350 and once it did get warm, it got so warm the outside of the cupcakes blackened.  Broiled cupcake, anyone?  The second attempt never turned into cake, even though the batter looked like cake batter.  I’m again going to blame the hotel room oven.  I finally gave in on the third attempt and made mini cupcakes using this gadget.

Chocolate Bourbon Mini Cupcakes
(Based on this recipe from Jim Beam)

Frosting
I used this recipe for my favorite buttercream, dropping a dollop of frosting on top of each mini cupcake and refrigerating to firm up the frosting. (Please note I replaced the milk in the frosting with bourbon. Add bourbon sparingly, as it thins frosting quickly.)

Then I melted chocolate chips of questionable origin in the microwave. My stash of good chocolate was quickly depleted! I turned each cupcake upside down and dunked it into the melted chocolate chips and sprinkled the top with chopped pecans. Sort of bourbon ball-like. These turned out really well–so well that I had trouble keeping this mischievous fella out of them until the Sweet of the Week Friend arrived! 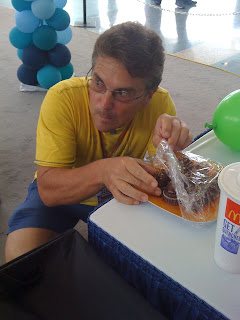 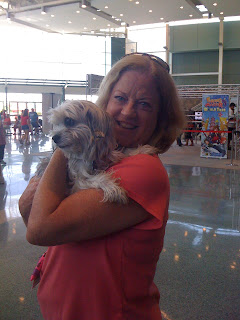 This week’s Sweet Friend is Pam.  I only get to see Pam once a year at an event where I work in Kentucky.  She’s the go-to-gal for information on anything I have ever needed while working in Kentucky. She has all the insider info on where to eat, where to find the obscure yet necessary supplies I have forgotten and need to complete my job…and my guess it that she takes the time to help all of us working at this event attended by over a million people to feel at home in her city.

Pam has this really adorable little grandson (and I’m not saying he’s adorable because he belongs to a friend, he really is a super cute little guy, more so than most!) but she also seems to really like fur-kids.  My little furry guy comes to work with me occasionally and looks forward to seeing Pam.  Anyone that will spoil my dog is high on my list of Sweet Friends!

I enjoy bourbon, mostly in baking and milkshakes, and have sampled quite a few brands but was overwhelmed at the bourbon selection in Kentucky. My first night there this year I went to a liquor store and discovered I could buy bourbon at a drive-thru.  But I didn’t, only because I wanted to go inside and look at the vast selection.  I’ve been to liquor stores with smaller wine selections than the bourbon selection in Kentucky!

I asked the guy working at the liquor store which bourbon paired best with chocolate. “Pardon me, ma’am?  Did you say chocolate?”  Why yes, I did.  “Well, I like this one straight from the bottle and you just can’t go wrong with Maker’s Mark.”  That was not the input I was expecting.

The next day I asked Pam for her input on which bourbon worked best in baking, which would work best with chocolate.  Pam told me she is a Kentucky native, which means she drinks it all.  While surprised that no one I had asked was particular about bourbon, I appreciated the honesty and the lack of posturing.  I really enjoy the folks in Kentucky, no pretension, just good folks who say what they mean.

But back to Pam being the go-to-gal for information on all things Kentucky.  Instead of leaving me hanging with my bourbon quest, she dropped by with a state trooper, Trooper Brown.  No kidding, he called me ma’am at least 5 times in as many minutes.  Trooper Brown is from Bardstown, Kentucky, the world capital of bourbon and Pam brought him by to share his bourbon knowledge.  And guess what he suggested?  Maker’s Mark. He gave me a solid lead on obtaining a bourbon barrel, had a good look at the mini cupcakes, suggested attending the Bourbon Festival and was on his way, off to defend the state of Kentucky from bad bourbon making.

I’ve already started making my list of things to ask Pam about the next time I’m in Kentucky.  We’ll see if it results in her bringing by another man in uniform who calls me ma’am with a charming southern lilt. 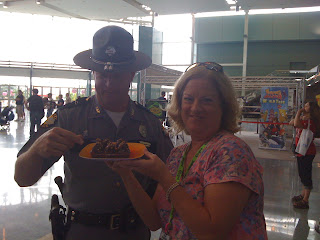 « Sweet of the Week #35, Dancing in the Kitchen with Gluten-Free Girl and The Chef, Chocolate PB&J Brownies
Done! Complete! Finito! »