It’s been sixteen months since I have had a donut, a real donut from a bakery.

If you are new to my donut journey, I should explain that about halfway through the 52 Donuts journey, I was diagnosed with gluten-intolerance.  I spent the last 6 months of the donut quest watching my friends eat donuts while I chose a gluten-free sweet to eat instead.  I really, really miss donuts.  Yes, I’ve had donuts but they have been of the frozen, gluten-free variety or have been baked in my kitchen.  I have missed the experience of picking out a donut from the bakery case, of having a choice of more than one flavor, of simply having a donut with a friend.

When I went gluten-free, the Babycakes NYC cookbook made my life a bit brighter. It’s gluten-free and vegan, mostly free of refined sugar and still packed full of yumminess. It’s hard to believe that baked goods can be so tasty after removing so many of the foundation ingredients.  I cook from their cookbook often and recently have been considering traveling to New York just to get a donut from the bakery (well, that and to see Pee Wee Herman’s new show on Broadway).  But today I got an awesome surprise.  My friend Mandy brought me a box of goodies from Babycakes NYC.  Fresh off of the plane, she met me in a parking lot with this: 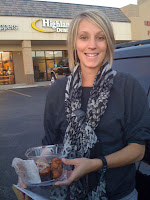 Can you believe it? A box of goodies from Babycakes!  A donut, brownies, a chocolate chip cookie and the best slice of sweet, fruity carrot spice bread I have ever had. AND A DONUT!  Did I say that?  She brought me a DONUT!  A GLUTEN-FREE DONUT!  If you are tiring of my typed shouting, imagine what it was like spending the afternoon with me when I found out she was on her way back to KC with the box of the famed gluten-free goodness!  I spent a few hours giggling and dancing, having trouble sitting still thinking that I just might get a donut, a real donut that I could actually eat.  Not a frozen donut, not one that I had to cook myself, a real donut from a bakery. Woo hooo!

Mandy handed over the box while I asked a million questions about the bakery.  What was it like? How was the selection?  Was it tiny? What did you have? Would you go there again?

And then I promptly dropped the box on the ground.  It popped open and these cherished goodies scattered all over the parking lot.  I could have melted into the pavement, but instead shouted something pretty inappropriate and scurried to put everything back together and into the box.  I would not let a little disaster prevent me from enjoying these goodies!

I finished my errands and realized I was going home to an empty house with the box of goodness.  Somewhere along the way on the 52 Donuts journey I discovered how much I liked sharing donuts with friends, so I called Em to see if I could bring my box of goodies to her house.  She’s always great to indulge me in my baking and donut madness and welcomed me over.  We spent the next 30 minutes eating every crumb of goodness that survived the parking lot incident. I barely managed to suppress the urge to phone Mandy, just so I could shout into the phone, “These treats are AMAZING! When are you going back?  Got any more in your suitcase?  I know you are hiding more donuts!” 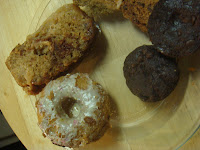 The brownies had the deepest chocolate flavor of anything I have ever eaten, gluten-free, vegan or otherwise.  Moist, not crumbly and simply rich.  They were mini cupcake size and I wouldn’t want one any larger–any larger would have been overwhelming to my tastebuds.  The chocolate chip cookie tasted just like a traditional, cooked-by-someones-mom cookie.  It was perfect in texture and flavor, not a combination easily achieved in the gluten-free baking world.  The carrot spice bread was moist, fruity, very cinnamon-y and I would eat an entire loaf of it if it were handy.  But you want to know about the donut, right???

The donut was the Vanilla Sprinkle flavor.  It is the current record holder for Most Expensive Donut on the 52 Donuts blog.  It was $3.25 according to the cute menu postcard Mandy brought back.  Wow!  After tasting it, I would have gladly paid twice that much. 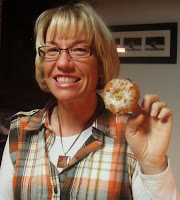 The hole in the donut did not go all the way through.  Em wondered if it helps to hold it together to not have the hole go all the way through, as gluten-free products are often tricky to keep together.  It was a dense cake donut with a nice glaze on top, not too sweet with just a few little sprinkles.  Perhaps the most interesting thing about this donut was that it did not have any of the icky gluten-free flavor I often encounter when buying gluten-free baked goods away from home.  It would have easily passed as a regular donut.  I didn’t want it to be gone, but couldn’t stop eating it either.  I don’t think this perceived tastiness had much to do with my 16-month donut embargo, I think Babycakes NYC makes amazing donuts.  I think you need one and you could bring me one, too.  I’d join you for one of these donuts in a heartbeat!

For those of you who do not eat gluten-free (or who do and know how disgusting some of the gluten-free baked goods are) and question what I am saying about the flavor of the Babycakes NYC treats, Mandy compared cupcakes from Babycakes and the famed Magnolia.  She favored Babycakes over Magnolia.  So there you have it, gluten-free can absolutely be tasty. 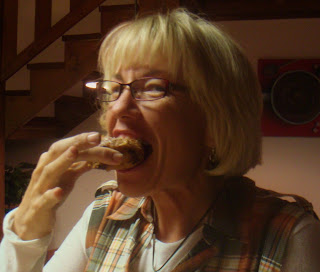