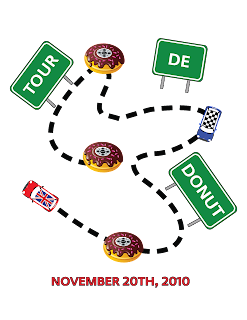 Howdy donut fans!  It’s been awhile since I’ve updated here, but I have still been enjoying a few donut adventures.  I’ve got news to share about the Krispy Kreme donut burger and my husband’s follow-up creation, the apple fritterloin, a deep-fried tenderloin sandwich with two apple fritters for the bun.  It was tasty, I hear! I’ll share those fun finds soon, but today I wanted to invite you, my fellow donut fiends, to a donut crawl, Kansas City style.

The Tour de Donut will be held on Saturday, November 20th.  We’re starting in Overland Park, Kansas at 7 in the morning and concluding around 10 in the morning in Independence, Missouri.  We’ll stop at five of my favorite locally-owned donut shops, long enough to have a donut and a cup of bad coffee before heading on to the next stop.  For those of you serious about your donuts, a few folks will be leaving the final official stop in Independence to head north to visit a donut shop located between a strip club and a used car dealer.

How many donuts do you think you could eat on such a trip?  How many bad cups of coffee served in 8 ounce styrofoam cups could you down?  Think you’ve got what it takes to eat two dozen donuts in one morning?  I’ve got a few fun 52 Donuts prizes to share with the winners.  You should probably start training now…Folks from a couple local car clubs are joining us for the Tour de Donut, which promises to make this even more fun!

If you plan to join me on the Tour de Donut, please drop me an e-mail at 52donuts(at)gmail.com.  I’ll respond with the details.  Bring a friend, a full tank of gas and an empty stomach.