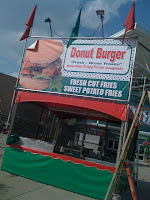 In August, I spent two weeks working in Louisville, Kentucky at the Kentucky State Fair.  This was the view from my sculpting space:

I’m vegetarian and gluten-free, my sculpting partner/husband is also vegetarian, but we couldn’t let this opportunity pass us by.  We rounded up our friends Mark, Greg Frisbee and Patti, one of the Lumber Jills for a taste test.

The Krispy Kreme donut burger with bacon and cheese was $8.  It was also available as just a burger.  The only side dish available was sweet potato fries, which were reportedly very tasty.  I asked lots of folks, prior to our friends sampling the donut burger, if they had given the burger a try.  Most of them were not interested in trying the burger, but did have the fries.  The donut burger gained a horrible reputation and lots of chatter, with local media commenting on it almost daily.  While I understand to some extent, I don’t think the donut burger is that much worse than other fair food.  The bun is 400 calories, compared to 230 calories for a Whopper bun at Burger King.  Not that big a difference really, if you are going to go all out and eat a bacon cheeseburger.

The verdict from those who tried the burger: none of them could eat a whole donut burger.  All of them said they would eat part of one again.  And then my husband decided two apple fritters would make a great bun for a fried tenderloin.  Watch for that video soon. I’m betting the apple fritterloin will be coming to a fair near you soon! 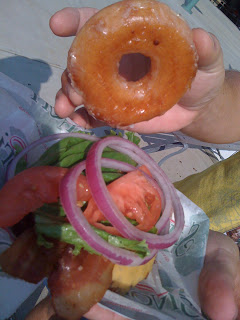 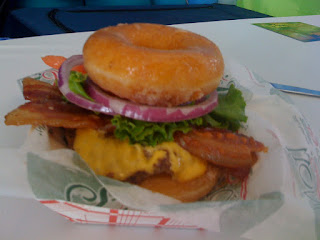