Extras
1 egg (egg wash for crust)
3 T. sucanat for sprinkling on top of pop tarts (Turbinado sugar might also work, but would probably melt more into the top of the pop tart)

Mix flour, salt, sugar and xanthan gum together.  I do not sift the rice flour blend, however if you were substituting all-purpose flour, I would sift.  Add Crisco and break up with a pastry cutter.  Next add the butter and mix with pastry cutter until crumbly. You should still be able to see butter not completely mixed in.  Begin adding the cold water, just a little at a time until you reach the texture of pie crust dough.

Divide the dough into two equal balls and chill between two sheets of plastic wrap for 30 minutes. Make the filling while the dough chills.

While the filling cools, roll out dough and cut for pop tarts.  Instead of rolling out on a floured surface, roll out dough between the sheets of plastic wrap.  Roll out slightly thinner than for pie crust.  Each ball of dough should roll out into a rectangle the size of a large baking sheet.  You will cut this into 8 rectangles the size of a pop tart from the grocery store, I guessed that to be about 4″ x 6″.

Put a heaping tablespoon of filling in the center of half of the dough pieces.  Cover with another piece of dough and seal using a fork.  Brush the entire pop tart with egg wash. Using a fork, pierce the pop tart in 3 or 4 places to allow steam to vent. Sprinkle lightly with sucanat. 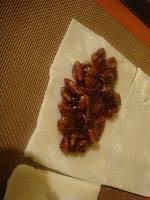 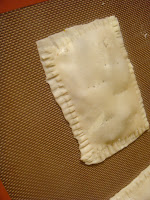 Bake at 350 for 20 minutes.  These will be just barely brown, not as browned as a toasted pop tart.  This is because they are only par baked.  If you want to eat these immediately, you could bake them a bit longer.

If you want to get all fancy, you can make a glaze to go on top of these.  I did not have good luck toasting them with the glaze (think toaster fire…) but it does work well in a toaster oven or under the broiler on low for just a few moments.  When placed vertically in the toaster, the glaze slid off and created a little excitement in the kitchen.

Mix together in a small bowl.  Spread onto top of pop tart with a knife.

This week’s Sweet Friend is Jenny of Making a Foodie.  She is the first food blogger I knew in person.  I met Jenny at Deanne‘s housewarming party. In conversation, I found out Jenny grew up near Tulsa.  I was preparing to work in Tulsa for an extended period of time and asked if she would e-mail me a list of restaurant recommendations, mentioning briefly that vegetarian suggestions would be great.

A few days later, I got a lengthy e-mail from Jenny.  She had gone to a lot of trouble for me, a mere acquaintance from a party, and put together a list of restaurants in Tulsa.  She mentioned places that might work for a vegetarian and also teased that if I asked for tofu in Tulsa, they might get a rope.  I printed the list and took it with me to Tulsa. I packed my own tofu just in case.

While working in Tulsa, I would often have dinner with other artists working at the same event.  The e-mail of restaurant recommendations from Jenny became referred to as “The Jenny List” by those of us looking for good places to eat.  I could count on my cell phone ringing nearly every afternoon I was in Tulsa, with the friend on the other end asking, “What’s on The Jenny List for Thai food?  Any Mexican recommendations?  I’m kinda hungry for deli food.  What’s Jenny say?”

I don’t think any of these folks have had the pleasure of meeting Jenny, but last Summer one of them did ask me if I could get a Jenny list for any other cities. What was on that list was a good, solid group of recommendations, none of them a let-down.  I dined at restaurants in Tulsa that rival those in larger cities.  I ate at a diner straight from a Normal Rockwell painting.  The best Thai food I have ever eaten was in Tulsa.  Jenny’s recommendations were just what this vegetarian girl needed to thrive in that town.  I’ve since been back to Tulsa a few times and have always made time for a meal at a restaurant from The Jenny List. Now that she is hosting Test Kitchen events in Tulsa, my list of places to try there is broadening.

Then I became a food blogger.  Jenny pointed me in the right direction a few times, provided me with some donut leads to get me started on my first 52 journey.  Recently she shared some insight on a new food endeavor of mine and I’m really grateful for it. She’s got a terrific way of sharing information without pointing out my lack of experience in this area and I trust her food knowledge, in part because she has SO much enthusiasm for food. I love that!

On Christmas morning, I dropped these pop tarts off on Jenny’s doorstep, shared a quick hi-bye and was back on the road.  I neglected to take a picture of Jenny with the pop tarts. Instead, you get this one…Jenny and her handsome little man ordering donuts. This is perhaps the greatest lesson I have learned from Jenny–dine anywhere, try it all, whether it be an award winning restaurant with a famous chef or a donut shop. And enjoy it all! 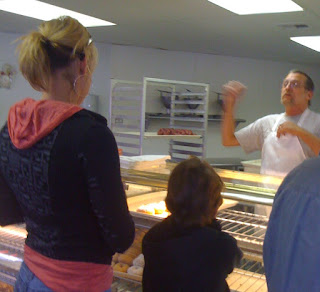