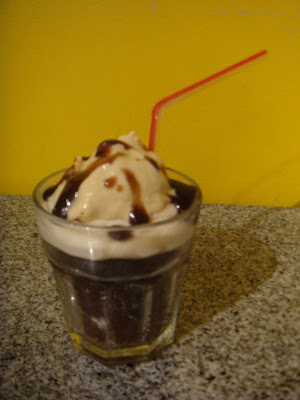 This week’s Ingredient is Root Beer.  I used two variations on Root Beer, both local to the Kansas City area.

In the frosting and the ice cream, I used Shatto Dairy’s Root Beer Milk.*  A glass bottle of this milk is always in my refrigerator.  A favorite of my husband, it tastes like a melted root beer float.  I’ve not used it in a recipe before, however the flavor really came through and using whole milk instead of my usual skim made these a real treat!

*If you do not live in the Kansas City area, you could make your own root beer flavored milk using a root beer extract, readily available in the spice aisle. Or you could come visit, take a tour of the Shatto dairy and get your own bottle of this amazing milk!

In the frosting, the cake and the sauce, I used SodaVie’s Artisan Root Beer.  Last year I used their soda to make these cupcakes.  Not only are their sodas fun to drink and their flavor combinations interesting, they work extremely well in baked goods.  Using the standard cake mix and can of soda recipe, a “regular” soda flavor doesn’t shine in the finished product.  This isn’t true when using SodaVie’s blue-glass bottled sodas.

I baked these in Pokal glasses from IKEA.  Any heavy glass that is approximately 5 ounces would work.  Alternatively, you can make cupcakes.  The recipes make 12 baked in the glasses or 24 cupcakes. 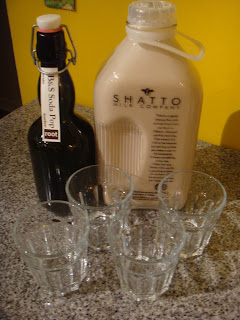 In a medium mixing bowl, combine half of the sugar and the egg yolks.  Beat together using a hand mixer until smooth and creamy, just a minute or so.

Place cream, 1 cup of milk, remaining sugar, salt and vanilla bean paste in a saucepan over medium heat.  Heat mixture to the point that it almost reaches a simmer, but do not let it simmer.  Remove from heat and let stand for 10 minutes.

Prepare an ice bath by filling a large mixing bowl with ice.  Place a stainless steel bowl into the ice bath and set aside.

Freeze in your ice cream maker, following instructions from the manufacturer.  This makes a very soft ice cream, I froze mine in the freezer overnight before serving.  This made approximately 1.5 quarts.

Root Beer Cupcakes
(Modified from the Root Beer Bundt Cake recipe in the BAKED cookbook, one of my favorites!)

Butter and Flour the glasses (As well as being functional, this add that frosty look to the glasses!)
or line cupcake tins with papers if not using glasses.

In a small saucepan, heat the root beer, cocoa powder and butter over medium heat until butter is melted.  Add the granulated sugar and coconut crystals, whisking until dissolved.  Remove from heat and let cool.

In a small bowl, whisk the 3 eggs until beaten then whisk until the cool cocoa/root beer mixture.  Gently fold the flour mixture into the cocoa mixture.  This will appear a bit lumpy.

Pour batter into glasses (2/3 of a cup) or cupcake tins (scant 1/3 of a cup).  Place glasses on a Silpat lined baking sheet so they don’t slide.  Bake at 325 degrees for 23 minutes in glasses, 20 minutes for cupcakes. 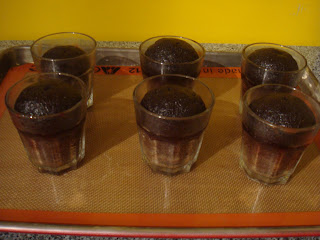 Dissolve cornstarch in 2 T. root beer.  Place remaining root beer and sugar in a sauce pan over medium heat for approximately 30 minutes, reducing it to 1 cup.  Whisk in cornstarch/root beer mixture and cook until thickened, 3 to 4 minutes.  Remove from heat and cool completely.

Beat the butter in bowl of stand mixer until light and fluffy.  Add root beer sauce and mix well.

Gradually add powdered sugar, one cup at a time.  Scrape down the sides of the bowl occasionally. 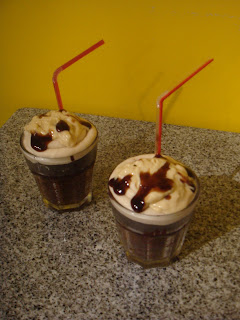