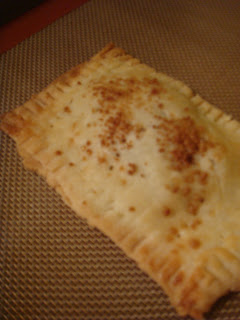 Anise is the ingredient from -the list- that I am using this week.  I first tried the combination of pineapple and anise in dessert tamales from La Tienda Chiquita for Christmas dinner.  I made a note to use pineapple and anise in something, then Jacob’s ingredient suggestion rolled in. Perfect timing! I chose to use star anise, which is unrelated to anise, however contains the same major flavor component, anethole. Perhaps you could substitute anise seed or anise extract if you had those on hand.

Extras:
1 egg (egg wash for crust)
3 T. sucanat for sprinkling on top of pop tarts (Turbinado sugar might also work, but would probably melt more into the top of the pop tart)

Mix flour, salt, sugar and guar gum together.  I do not sift the rice flour blend, however if you were substituting all-purpose flour, I would sift.  Add Crisco and break up with a pastry cutter.  Next add the butter and mix with pastry cutter until crumbly. You should still be able to see butter not completely mixed in.  Begin adding the cold water, just a little at a time until you reach the texture of pie crust dough.

Divide the dough into two equal balls and chill between two sheets of plastic wrap for 30 minutes. Make the filling while the dough chills. Place all ingredients in a sauce pan over medium heat.  Stirring occasionally, cook until liquid has thickened and pineapple is slightly caramelized.  Remove from heat and let cool.  Remove anise pods before using filling.

Instead of rolling dough out on a floured surface, roll out dough between the sheets of plastic wrap.  Roll out slightly thinner than for pie crust. One ball of dough will roll out into a rectangle the size of a large baking sheet.  You will cut this into 8 rectangles the size of a pop tart from the grocery store, I guessed that to be about 4″ x 6″.

Put a heaping tablespoon of filling in the center of half of the dough pieces.  Cover with another piece of dough and seal using a fork.  Brush the entire pop tart with egg wash. Using a fork, pierce the pop tart in 3 or 4 places to allow steam to vent. Sprinkle lightly with sucanat.

Bake at 350 for 20 minutes.  These will be just barely brown, not as browned as a toasted pop tart.  This is because they are only par baked.  If you want to eat these immediately, you could bake them in the oven a bit longer.  For toasted pop tarts, freeze these until ready to eat, pop them in the toaster on the “dark” setting and toast away.  They brown nicely in the toaster and taste oh so good.  Enjoy! 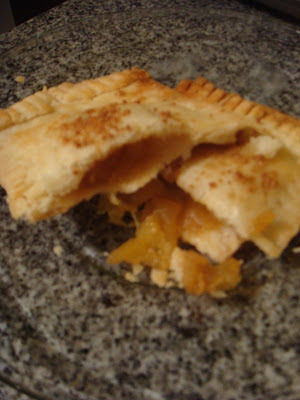 « Donuts in 2011
Sweet of the Week #4i, Chocolate Macarons with Prune Filling »