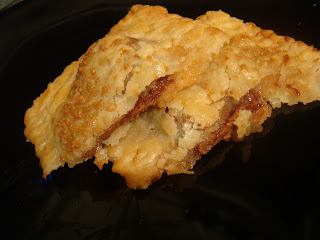 I sure do like making homemade poptarts or toaster pastries or hand pies or whatever the right name is.  We call them poptarts at our house. We also say Kleenex and Scotch tape.

I really should call them something else because they are nothing like the poptarts that come in a cardboard box.  Instead, they are made with my flaky gluten-free pie crust and delicious fillings unlike any that come in a prepared, over-processed, preserved, artificially colored substitute for a real pie.

The night before Easter, I decided I wanted to make poptarts with Cadbury Creme Eggs.*  Apparently you have to buy these eggs well in advance.  The Easter aisles at the nearby Walgreens and CVS were barren of the good Easter treats, people were frantically trolling the aisles looking for their last minute Easter basket goodies.  All I could find were the caramel Cadbury eggs. Oh well, that would work.

And then, there they were…hidden beneath a pile of other impulse items near the register, an entire unopened box of original Cadbury Creme Eggs.  SCORE!  I bought half a dozen of each and headed home to bake yet another treat with these eggs that I don’t even really like.  (Last year I made cupcakes with them.) 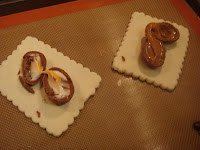 I used my pie crust recipe from here.  I cut the dough using this nifty new Toaster Pastry Press gadget from Williams-Sonoma.  The verdict is still out on this, I might like cutting my dough with a knife and sealing with fork tines better. I split each egg in half and placed it face up on the bottom half of the dough, topped it with another piece of dough and then brushed it with egg wash, adding a sprinkle of sucanat.  They looked really tall when putting them in the oven, but after baking they are as flat as any other toaster pastry since the chocolate melts. Even after sealing with the toaster pastry gadget, I went around the edges with a fork because it didn’t seem to seal well with so much filling.

I mentioned I am not a fan of the Cadbury Creme Egg but I really liked how they tasted in a poptart.  I did not care for the chocolate caramel version (and I do like that flavor combination usually) but the traditional Cadbury egg made for an interesting poptart.  Whatever the white part of the egg is made with stayed white after being baked and you could still tell it had a Cadbury egg inside the pastry.  The chocolate caramel version just became a gooey mess of chocolate and oil.  I’d stick with the regular version when making these again.

*Cadbury Creme Eggs are gluten-free in my area of the U.S.  They are not gluten-free everywhere, apparently not at all in Canada from what I can find on-line.  Please read the box carefully before eating these.  The printed ingredient list on the foil wrapper is almost impossible to read, however the display box has the ingredients and cross-contaminant list on the top. 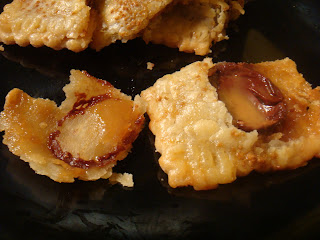