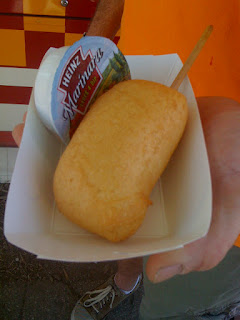 John is a big fan of cheese sticks.  Or at least he was when we ate more bar food, deep fried appetizers and late night junk.  I can’t remember the last time I saw him order cheese sticks at a restaurant, but it was the first thing he bought at the Iowa State Fair.

Now I’ve got you thinking about the crunchy coating on typical mozzarella sticks.  What John bought at the Iowa State Fair wasn’t like that at all, although that is what the initial attraction was.  Instead, it was a HUGE slab of mozzarella (maybe 4 ounces) that was breaded in something similar to corndog breading.  It was served with a plastic cup of marinara sauce.  John prefers mustard on breaded, fried cheese but ate the marinara anyway and rolled his eyes when I pointed out it probably contained HFCS.  Like we should somehow avoid HFCS at the fair, in the midst of our Food on a Stick gluttony.

This was rated in John’s top 2 finds at the Iowa State Fair.  Although I couldn’t try it, I would say it was a good value, based simply on the large amount of cheese. 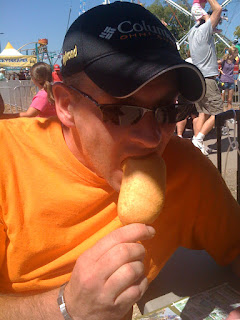 « Food on a Stick #19, Pecan Nut Roll Dipped in Chocolate on a Stick
Sweet of the Week #12i, Pumpkin Crepes with Mangosteen Ricotta & Triple Berry Brandy Reduction »