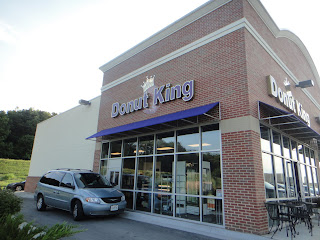 One of my favorite donut shops, Donut King, has recently relocated.  I went to visit the new location and thought I’d tell you all about it.

During my 52 Donuts journey, I visited the original Donut King at the urging of my friend Sheila. It was the donut shop of her childhood.  It was such a great donut shop that I included it as the bonus stop on Tour de Donut.  Situated between a strip club and a tattoo parlor, the building’s bright purple exterior fit perfectly in an area that was certainly colorful.

And then progress happened.  For 42 years, Donut King has been located on a two-lane stretch of Chouteau Trafficway.  The road is now being widened to four lanes and will include a bike lane on both sides.  As a cyclist, I’m excited about this.  As a donut fiend, I’m sad about this.

Two months ago, Donut King opened in its shiny new home, a strip mall in North Kansas City.  One end houses Quizno’s, the other Donut King.  In the middle is a dentist office and a medical supply store.  There’s no discount smoke shop across the street, no Stack’s Diner aroma, no used car salesmen pacing the neighboring lot.  But there are still plenty of really amazing donuts.  In fact, there are more donuts than were ever on display at the original location. 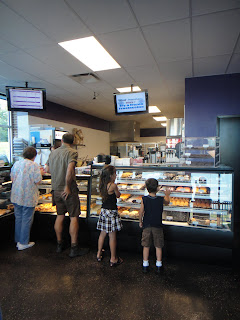 The new location has two enormous bakery cases (enormous compared to the old location) and a spinning bakery tower filled with cupcakes.  Overhead monitors flash donut flavors and the purple Donut King logo.  A view into the new spacious kitchen reveals carts overflowing with donuts. There is also a drive-through now, a simple window where you pull up and give your order to a real person, not a speaker box.  This reminded me of Donuts Ala Mode in Liberty, Missouri, a long-gone piece of donut history where I worked briefly in college. This system works well, since not every flavor is always available and speaking to a person face-to-face makes the ordering process much more efficient.

On the morning of my most recent visit, a fella in UPS browns was ordering donuts with his two kids.  Another fella was picking up four dozen donuts.  A guy came in, was greeted by name,  and discovered the sausage rolls were gone for the day and left without buying anything.  He will surely be back soon.  I recognized one of the four folks behind the counter as the gal from the old location who had shared with me that her mom had worked there, she could remember coming with her mom to work at the purple donut house when she was a small child.  The people of Donut King are still there, the delicious cake donuts are, too.  They’ve even added purple signage to the building, without the flashing lightbulb surround.

I asked how things were in the new location and was told they had been probably twice as busy as in the old spot.  I wonder if it is because of the new-ness or if they are pulling in lots of new customers from Cerner’s Northland campus and North Kansas City hospital?  Regardless, they are still churning out some of Kansas City’s best donuts. 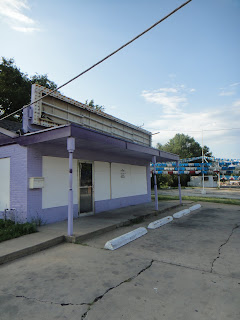 This morning I drove by the old location.  It’s boarded up, stenciled paint says “DANGEROUS BUILDING by order of KCMO.”  This would make Jamie Oliver smile. The landmark flashing purple sign has been removed.  The nearby strip club was being demolished, dump trucks stood by to haul off the broken down remnants of much debauchery.