After about a month of non-stop State Fair Food on a Stick, it was getting pretty hard for me to convince John he needed to eat Just.One.More Food on a Stick.  One hot afternoon he agreed to take a break from sculpting and eat a Deep Fried Snickers on a Stick. 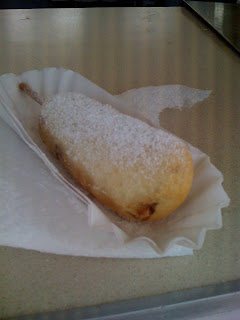 A frozen Snickers bar on a stick was dipped in a batter that resembled funnel cake batter.  After being fried, it was dusted/drenched in powdered sugar.  It was a good twenty minutes before this was cool enough to eat.

John eats plenty of candy bars, just not deep fried.  He was not a fan of this either.  It did appear to be a little messy. His reaction was similar to the Twinkie Doodle, he said it was just too sweet and ate only part of it.  Who does that?!?  (I’m teasing, John was a great sport and consumed thousands of calories in food that I cannot eat, all for the sake of this silly project.) 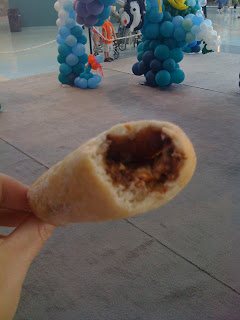 It was on this day that I decided someone needs to make something deep fried with Nutella.  John would eat that every single day.  Come on, Fair Food creators, make it happen!