A Note from Johnna:  My friend Jenny, a native of Tulsa, rounded up the final 7 Foods on a Stick. What a great way to end the journey, Foodie style.  Read on…and enjoy!

Food on a Stick Research #46 – #52
Eaten and almost digested by Jenny Vergara at
The Tulsa State Fair 2010
Introduction: In terms of things to do at a State or County Fair, one would certainly rank eating right up there at the top.
In the early years of “State Fairhood”, one would find tents offering much simpler fare than the complex oddities that are offered today. Back then, it would have been considered a treat to enjoy a simple ice cream cone, some roasted nuts, a pretzel, cotton candy, soda pop or a hot dog. Then there is the Grand Pappy of all Fair food on a stick: the corn dog. The corn dog is one of my all time favorite treats on a stick. I love its sweet crunchy brown corn crust, and it’s hot, but tender, pink hot dog center, for me, always dipped in a bit of yellow mustard. Truly, food on a stick does not get much better than that.
As the technology in mobile cooking equipment improved, so did the options of fried things we could put on a stick. Our creative juices began flowing. No longer content with the old standbys, our mobile kitchen trucks allowed us the ability to fry almost anything that would hold still long enough to have a wooden stick shoved up its end.
Suddenly, we began seeing Fried Raviolis, Fried Candy Bars, Fried Stuffed Olives and Fried Cheese. Still clever, but these were still pretty standard types of food on a stick. Things we probably had eaten or seen before.
With the advent of Food Network and foodie culture, TV shows began to appear highlighting the best of the worst Fair food. That is what quickly set the stage for the more extreme items – Fried Conch, Fried Mashed Potatoes, Fried Alligator and Fried Butter etc. They are predicting that this year at the 2011 State Fairs across the country Fried Kool-Aid on a Stick will be the hot new food item. Can you imagine?
These mobile carts with their deep fat fryers, ovens and flat-top stoves on board, were the early adopters of our modern day street food or food truck fetish. Our earliest memories and experiences with Food Trucks in the Midwest did not happen on a busy street corner downtown, they happened at State Fairs.
So, let us wrap up the final 52 Weeks of Food on a Stick and celebrate this portable, affordable treat. . .if only once a year . . .when the Fair is in town. 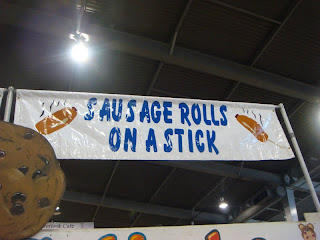 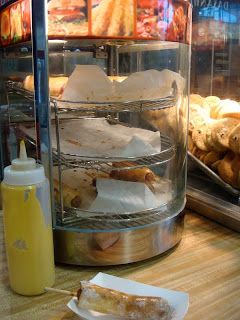 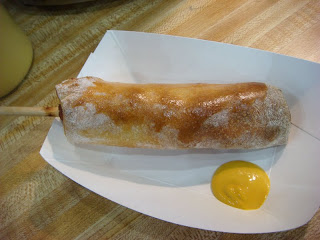 #46: Sausage Roll on a Stick  – In many donut shops across Oklahoma and Texas you will run across something known as a kolache. A kolache is a Czech term for the famous circular tart made of double-risen dough, with a center topped or filled with a sweet sauce made of poppyseed, cottage cheese, prunes or other fruit filling. The same shops that makes kolaches also happens to make sausage rolls from the same double risen dough. The only difference is inside of these they bake a plump sausage, just like a pig in a blanket. This version at the Tulsa State Fair was more like a toasted pita wrapped around a hot dog, than a true yeast roll. The hot dog did have cheese inside of it, which added something to the flavor, but the dough was a disappointment. Rating: D 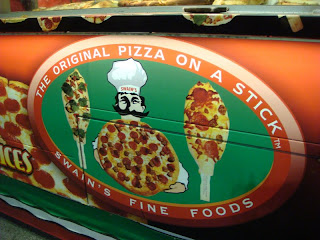 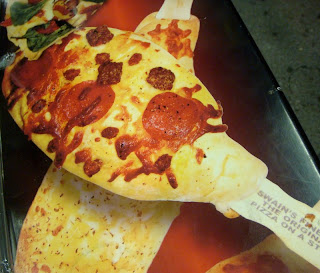 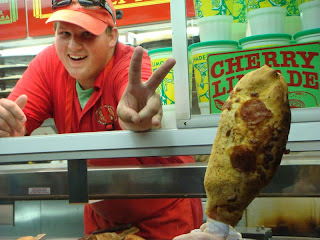 #47: Pizza on a Stick – In my mind, I could not figure out how one was going to offer pizza on a stick. My imagination literally had envisioned a triangular piece of pizza with a stick baked in the crust. What we got instead was the biggest gut bomb of the night. It was the size of my shoe in length, heavy with dough and tomato sauce and pepperoni and cheese. It looked like a calzone on a stick, but when I bit inside I could see spiraling layers of tomato, cheese and pepperoni, as if they made a small pizza and then wrapped it around a paint can stir stick and baked it. The flavor of the pizza was average, similar to Chef Boyardee. The real issue was the pizza was chewy and so heavy that only a couple of bites were enjoyed before we realized we were not going to be able to finish it and the task at hand. So we moved on, after eating only a couple of bites. Rating: C 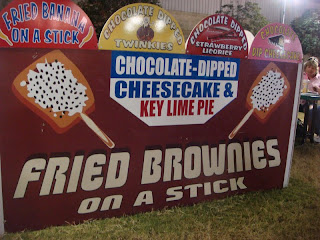 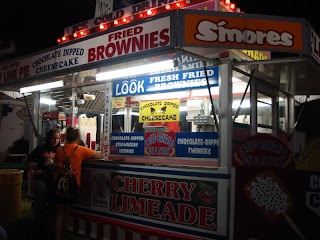 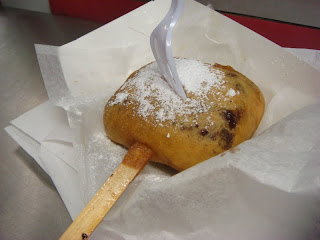 #48: Fried Brownies on a Stick – This rich sounding, indulgent bit of chocolate gooey goodness was something that I was really looking forward to wrapping my lips around. This was going to be my dessert for the whole night and I wanted to make it count. Unfortuantely, the reality did not match up to my fantasy. An icy cold block of brownie was taken from the fridge, dredged in a light batter and held by the stick in the fryer until it was almost golden brown. A dash of powdered sugar and it was ours to try. The first warm chocolate bite was delicious with the crunch of the crust, but as the oil began to leak out into the paper boat it was served in, we realized that this might kill us if we tried to finish it. Truth is, we really would have preferred just to eat the brownie by itself. Another thing worth mentioning is, I suppose you could have eaten it by the stick, but it was so heavy, that I was afraid to try it for fear of my fried goodness hitting the dirt before I had a chance to get it into my mouth. Rating: C 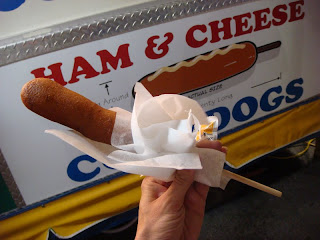 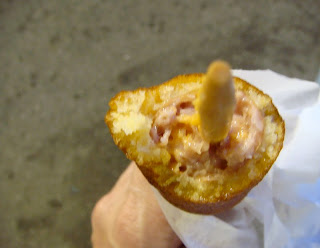 #49: Ham & Cheese on a Stick – This was, by far, the worst “food on a stick” experience all night. Billed as a Ham & Cheese on a Stick  . . .again, I am picturing a Monte Cristo style of sandwich with layers of warm black forest ham and melted cheese on Texas Toast, dipped in batter and deep fried. No. Not. Even. Close. What I got was a corn dog filled with chopped ham salad and melted American cheese. It looked and tasted like baby food. It was mushy, and disgusting. I took one bite for the cause, and pitched the rest. Rating: F 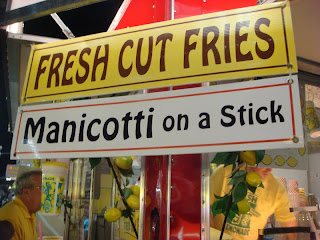 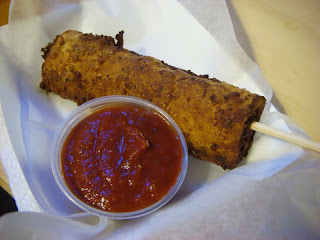 #50: Manicotti on a Stick – This was actually like eating a very long, meat or cheese filled Fried Ravioli. It was golden brown and crispy with a warm and gooey cheesy center with a lovely side of marinara to dip it into. Not hugely, revolutionary . . .but delicious. Rating: A 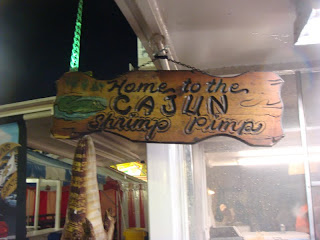 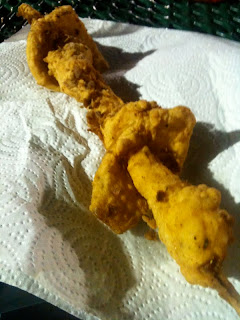 #51: Fried Shrimp on a Stick  – I knew I was in trouble when we approached this trailer on the outskirts of the State Fair, and inside were overall wearing, mullet-sporting, toothless old men drinking beer while the sign outside said “Pimps of the Shrimps.” I thought to myself this is either going to be the best Fried Shrimp on a Stick of my life, or the absolute worst. It sadly, was the latter. They had pre-cooked these Fried Shrimp skewers that had alternating hunks of white onion and shrimps, so by the time it was served to me from under a heat lamp it was luke warm, tough and chewy. So tough and chewy, that I could not even slide it off the wooden skewer to even eat it. It looked a little dodgy all the way around. Rating: D 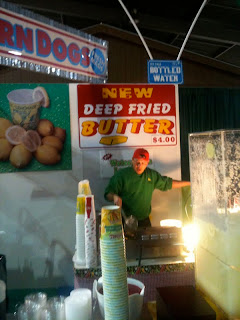 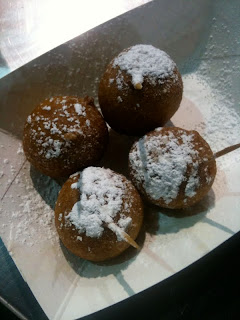 #52: Deep Fried Butter on a Stick – The hottest new item to try at the 2010 Tulsa State Fair was the Deep Fried Butter on a Stick. We had a heck of a time locating the actual booth that was making them. Everyone we asked sent us off into the wrong direction, until finally with only 10 minutes before the Fair was to close for the night we managed to scoot in front of the right booth. Panting and dripping with sweat, we begged the guy who was shutting down for the night to make us one last batch of the Deep Fried Butter. He took pity on us, and made them for us. It was the most delicious thing I put into my mouth all night long. No lie. Frozen butter balls are dipped in batter and deep-fried into balls. The curious part is once you bite into them you do get a pleasant release of butter, but the balls are mostly hollow with the butter just cooking right into the batter shell it was encased in. It was like the best, most buttery, funnel cake you ever tasted, and I loved it, even if my waistline didn’t. Rating: A
What an amazing way to end the 52 Foods on a Stick round-up!  Thanks to Jenny and all of the intrepid foodies who joined me in the fun.  I appreciate all of you for your adventurous culinary spirit and wanton calorie consumption!  –Johnna
« Food on a Stick #44 and #45, Choc-o-Lait Milk and Choco-o-Lait Cointreau
Fair Food Safety »