Recently I worked in Louisville, Kentucky for a couple of weeks.  On the way home, we took the long route through Cincinnati and Indianapolis, primarily to visit Jungle Jim’s in Cincinnati. 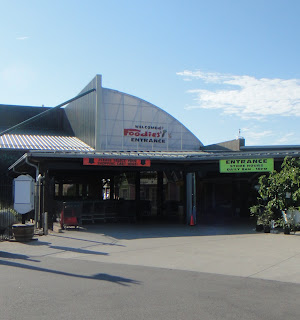 I first heard about Jungle Jim’s from Mark.  He posted pictures on Facebook of grocery store craziness that I knew I needed to experience. Even the entrance beckoned, with a huge “Foodies Entrance” sign.  To visit, I would need to drive two hours further away from home, but I decided it was worth it after reading the Food Network had been there, CNN and Time had featured it AND they had a store map on their website.  Any store large enough to need a map deserves a visit. Off we went…

We passed by Florence, Kentucky, where I spotted this water tower.  The water tower originally advertised the Florence Mall, but there was controversy and the M in mall became a Y, y’all.  We didn’t stop in Florence, but it was good to know I was for a brief moment amongst folks who talk like me. 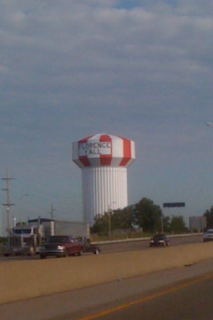 This was my first visit to Cincinnati.  I’ve driven through but never spent any time there.  Zipping along the highway, we popped over a hill and there it was, the skyline!  What a pretty sight.  While we didn’t spend much more time than necessary to visit Jungle Jim’s, it did seem like nice town.  They have IKEA and Jungle Jim’s, so I would be hard-pressed to say much negative. 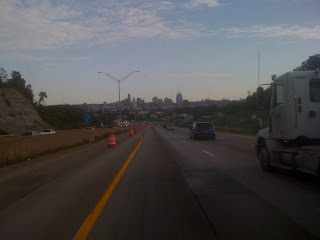 It wasn’t difficult to spot Jungle Jim’s.  A monorail wraps around the parking lot, giant concrete jungle animals surround the entrance, complete with a waterfall.  I entered through the door beneath a sign that says, “Once inside, I immediately looked for a paper map–this place is HUGE.  The map has a great route marked on it and I followed along, knowing I’d be lost if I didn’t. 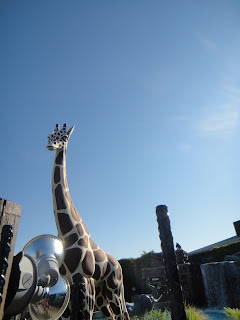 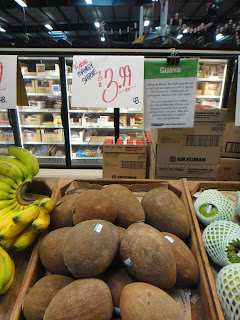 The produce section at Jungle Jim’s covers an entire acre.  It was slightly overwhelming, so many things to look at.  I used my smart phone extensively to look up information on fruits and vegetables I had never seen before.  Among the items I bought were prickly pear cactus paddles (opuntia), monstera and mamey sapote.

I had a great time looking at all of the international foods.  It was like visiting my favorite Indian market, Asian market, Cost Plus World Market and the regular grocery store all in one!  The Indian section had an actual TukTuk on display. The European market area had little closet sized areas for numerous countries.  I had so much fun looking at all of the  food products I’ve sampled on my travels and discovering others I have never even heard of.  It would have been easy to spend half a day just in this area of the store! 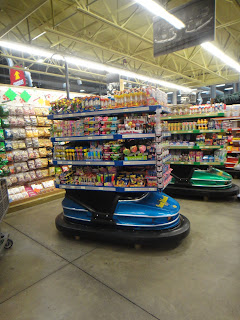 Perhaps my favorite sections of the store were the chocolate and candy areas.  Nearly the entire collection of Milka and Ritter bars in one store caused me to dance in the aisles.  I did much of my holiday shopping right there.  I saw packaged Buckeyes, several brands.  I had no idea these were made in a factory, I think of them as a homemade treat.  I also spotted the tiny little mints I came to adore in France and the hard candies from Belgium in the pretty little tins, the same tins I’ve used as travel jewelry containers since my first trip to Ghent. One area had lots of fun retro candies displayed on Coney Island bumper cars.  To find all of these treats under one roof IN OHIO was a terrific surprise!

The final section of the store for me to visit was the Gluten-Free area.  It was labeled, “The Largest Gluten-Free Selection in the Midwest.”  I don’t know if that’s true or not, but it was an extensive selection.  I saw several brands of mixes, bars and snack foods that were new to me.  Fresh baked goods from two local bakeries were on display.  It was fun to buy a single cupcake, fresh not frozen, to eat later in the day. 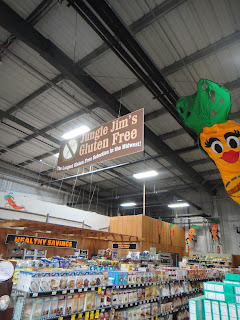 I was a little disappointed by a few things in the gluten-free foods department.  I spotted a brand of flour and grains I had never heard of, and while many of the products on display are naturally gluten-free, the package very clearly stated they are processed on the same equipment as wheat.  For people with a high level of sensitivity like me, that won’t cut it.  Then I saw a large display of Quaker items that are not gluten-free and the company has a statement on their website saying as much.  Sigh. 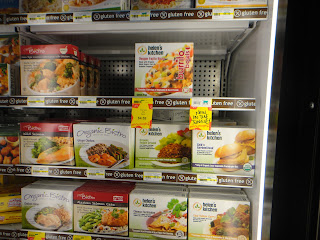 But the scariest discovery came from the gluten-free frozen foods department.  A meat-replacement item was on display that was nowhere near gluten-free, the first ingredient on the list was wheat.  I was disappointed, as I’d like a good veggie crumble and also worried, concerned that someone had purchased that item thinking it was gluten-free.  I found a staff member and pointed it out.  He said he didn’t work in that department but would find someone that does and let them know.  I hope that happened.  I don’t have the solution to the gluten-free labeling concern.  I don’t have a solution to how grocery stores can be better on top of this, but I do know we have to find a way to change it.  When I’m in an area labeled gluten-free, it would be nice to let my guard down.  In reality, I know that can never happen.

One area of the store I didn’t spend any time in was the liquor department.  I wish I would have had more time to browse and to check out the homebrewer’s area.  My suggestion would be to allot a full day for a first-time visit to Jungle Jim’s.

On the perimeter of Jungle Jim’s were more stores, a coffee shop and a pizza place.  It would be easy to spend a full day here.  You wouldn’t go hungry, that’s for sure!

To see more of photos from my trip to Jungle Jim’s, visit my Facebook page.