Several times in the past week friends have asked what we eat for Thanksgiving.  It’s a good question–what do gluten-free vegetarians eat on a day centered around Turkey and gluten-heavy stuffing?

It’s interesting to me that I actually started this part of my blog project, Johnna52, as a place to keep my Thanksgiving recipes last year.  A friend asked for my tofu-not-turkey-roast recipe and instead of just typing it out for her, I decided to post our Thanksgiving menu and a few recipes so I would have them for easy access next year.

Next year is here, it’s NOW, and I found myself consulting those recipes to make a shopping list.  And then folks started asking, so I’m going to share what we’re having this year. (I’m so thankful to be improving my photography skills, the photos from last year’s posts are beyond dreadful.  I hope to have better post-Thanksgiving photos to share this year.)

Salad
This year we’re having a variation on the beautiful Individual Stacked Salads from Diane at The Whole Gang.  I will be including mandarin oranges, dried cranberries and candied nuts. Once we pick up our CSA share on Wednesday, I’ll know what greens we’ll be including in our salads.  So exciting to have fresh from the farm greens this late in the year!

Sides
We’ll be making a double batch of this stuffing.  Half will be baked in our tofu roast.  The other half will be baked in a pie pumpkin, as suggested by Martha Stewart when I heard her speak in KC.  This evening I saw Alton Brown on a Food Network show saying he was also cooking his stuffing in a pie pumpkin this year.  I’m excited to try this and see if it works for me.

Baked Pineapple (I’m going to share this recipe with you after Thanksgiving so I have a good photo, it’s one of my favorites from childhood.)

Entree
We will be making our own tofu roast with cornbread stuffing.  While I know a lot of folks don’t cook turkeys outside of Thanksgiving, we do make our version of turkey a few times a year.  It’s just too good to only eat once a year. 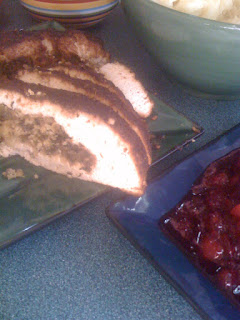 Bourbon Pumpkin Pie with pecan crumble, based on this recipe from Manifest Vegan.  I’ll use my own pie crust recipe and top it with a pecan crumble instead of the walnuts in the link.  If I get around to it, I’m buying a Babycakes cupcake maker this week and turning these pies into adorable little pies, inspired by the Electrified Cooks.

Leftovers
My favorite part of Thanksgiving is leftovers.  I love chopping up the leftover tofu roast and putting it, along with other leftovers, in pumpkin crepes and drizzling leftover cranberry sauce over the top. 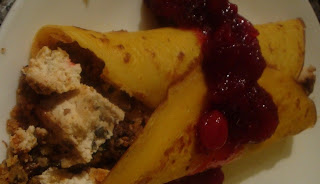 What’s Missing:
You may notice there are no rolls included in the year’s menu.  I’m torn on this one.  Last year I tried to make my family’s traditional butterhorn rolls.  My husband, a dedicated breadavore, ate them with abandon.  I thought they were a horrible semblance of the rolls I remember from my gluten days.  If time allows, I may try again. Or we may not have rolls this year or try someone else’s recipe.  I continue to be stymied by gluten-free yeast breads.  (While finishing the shopping list, my husband just said to me, “Aren’t we having any rolls?”  Guess I’ll be figuring this one out…)

Also missing is green bean casserole. Last year I spent nearly half a day making green bean casserole that was dairy- and gluten-free.  I made a from scratch dairy-free cream of mushroom soup with fresh mushrooms and almond milk.  I thinly sliced onions, tossed them in rice flour and fried them for the topping.  I snapped fresh green beans.  And then, over Thanksgiving dinner, we discussed that it really isn’t an important part of the meal to us.  So this year, I may pass on the traditional casserole. Or I might find a quicker way than spending a large part of a day making soup.  Anyone know of a gluten- and dairy-free cream of mushroom soup in a can or a box?

So there you have it, our 2011 Thanksgiving menu.  I’m looking forward to hearing what you are having, too!