First up, these adorable Oreo truffle snowmen from Cookies and Cups.

I went to my friend Renee’s house to make these with Trader Joe’s Candy Cane JoeJoes.  I hoped my husband would really enjoy these as he is a BIG fan of the Candy Cane JoeJoes. This is the first year we’ve had Trader Joe’s in town, which makes it the first year we haven’t either brought a suitcase of these addictive cookies home from our travels or had a friend in a city with Trader Joe’s ship them to us.  Since they weren’t so hard to obtain this year, there was a spare box in the All-Things-Gluten Box stowed in the garage.  I decided to use them to make a gift for him. 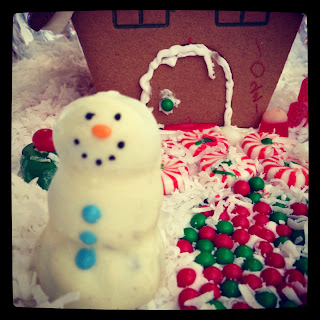 Renee and her kiddos E and A helped me make these. They made that adorable gingerbread house in the photo with the snowman truffle.   It was terrific to make the truffles with friends and also in a kitchen where gluten lives.  I didn’t have to worry so much about cross-contamination as I would using my own appliances and kitchen tools.

Here’s the scoop on these.  And by the way, if you are gluten-free like me, these work just as well with K-Toos.  Crunch up one full package of Oreos or Oreo-like cookies in the food processor.  Add in 8 oz. of cream cheese.  Roll into balls and freeze.  Renee discovered the best way to do this was to go ahead and stack them in the snowman formation, spear them with a toothpick or narrow skewer and freeze them stacked.  Our attempts before doing this were absolute failures, resulting in melted snowmen.

Speaking of melted snowmen, I saw the fun melted snowmen cakepops above on Pinterest.  They were created by Susie QT Pie’s Scraps of Life.  I am a mess when it comes to making cake balls, cake pops, cake truffles.  I’m not sure why it’s so difficult for me and know I’ve blogged about it several times.  But I finally found something that looks like what I usually make, melted snowmen! 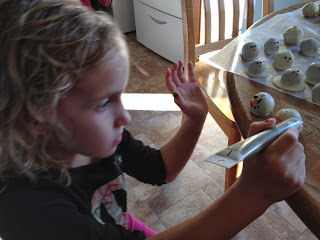 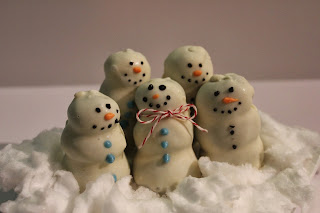 On to the next fun find…

The holidays aren’t complete without a cocktail!  I’m a fan of anything eggnog.  Except my body isn’t such a fan of dairy right now so I’ve been avoiding it anytime I can.  This year instead of having eggnog from our favorite local dairy, I decided to make Coquito. Here’s the one I pinned on Pinterest from Hello Beautiful:

Coquito is a Puerto Rican tradition, a coconut based eggnog type cocktail. It usually calls for white rum.  Earlier this month I put coffee beans from The Roasterie into a bottle of amber rum from Spirits of St. Louis, a microdistillery.  Oh my!  Within two days, the rum smell was equally mixed with the aroma of coffee beans.  So I left the beans in the bottle for two weeks, creating the best alcoholic concoction I’ve had.  It seemed fitting to use it in a holiday cocktail like Coquito.  Here’s my non-dairy version. 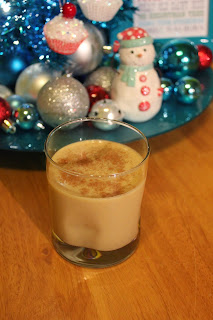 Coquito
1.  Make one batch of dairy-free sweetened condensed milk following This Recipe from Sunny at And Love It Too. Let cool before using.
2.  Over medium heat, cook 1 1/2 cups of So Delicious unsweetened coconut milk until it reduces to 3/4 of a cup. Let cool to room temperature.
3.  In double boiler, combine sweetened condensed milk, So Delicious milk (which is now equivalent to evaporated milk) and 4 egg yolks.  Whisk, whisk, whisk.  Cook until the mixture reaches 165 degrees.
4.  Remove from heat and add 1-8.5 oz can Cream of Coconut, 1 additional cup of So Delicious Unsweetened Coconut Milk and 1 to 2 cups of rum. (I use 1 1/2 cups, it’s a bit umm…warming. Add a little, taste test, and then add more.)
5.  Serve with a sprinkle of cinnamon over the top.  This is traditionally served in shot glasses but we go a bit larger here.

Still on a snowman kick and with egg whites leftover from the Coquito, I found another fun baking idea…

These meringue snowmen from were the perfect use of the egg whites!  I started with this idea from Curbly. I used the meringues recipe from Bon Appetit’s December 2011 issue, switching the peppermint extract for almond.  I drew the faces on with candy writers, keeping them pretty simple since they were packed into bags for surprise gifts in my Light ‘Em Up project. 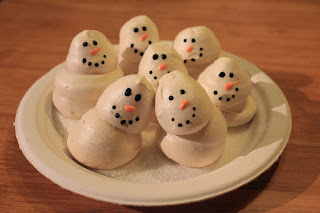 And one last holiday Pinterest-inspired creation…

I thought something like this cute peppermint bark pop from Not So Idle Hands would be cute on top of the cheesecake. Another find on Pinterest!

And here’s the one last little touch.  I saw these cute serving platters from Tutto Bella on Pinterest.  They are super easy to make, just line up mints on parchment paper atop a baking sheet, pop in the oven at 350 for 8 minutes or so.

I decided to try making saucers on which to serve cheesecake.  They came out of the oven a little uneven, due to my oven being unlevel.  While they were still hot (caution: this is dangerous), I used kitchen scissors to trim them into more even shaped.  It worked.  These are pretty fragile, but oh my goodness are they cute!

Here are a few photos of my cheesecake, my version of the peppermint bark pop and the cute peppermint plate I made: 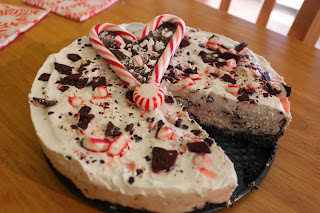 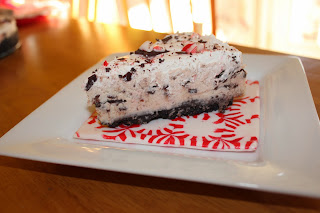 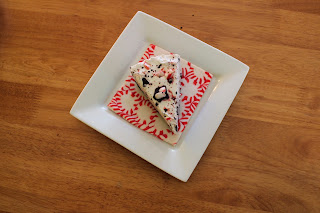 OH–about the cheesecake recipe!  Because this post has reached extraordinary length, I decided to give the cheesecake its very own post.  You’ll find the recipe for the cheesecake here.  It’s one of my very favorite cheesecakes ever.  Seriously, it’s that good.  If you like chocolate with mint, you’ll love this.

There you have it, my holiday Pinterest finds and what I did with them.  Tell me about yours!