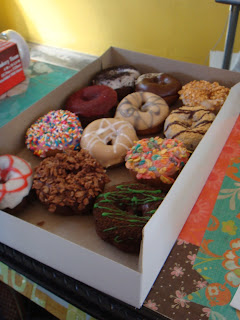 It’s that time of year again. Every December and January the food world is inundated with lists of hot food trends for 2012.  This time around, donuts got a little mention.

The James Beard Foundation Blog predicts donuts (or doughnuts, as it may be in their more refined world) will continue with their resurgence in popularity.  They’ve also suggested more regional and international varieties of donuts will make appearances.

The article points out that between 2010 and 2011 the amount of  “doughnut-dedicated content” on Serious Eats rose roughly eighty percent.  I was so ahead of this trend way back in 2009 when I started this crazy donut blog. For a minute, I did think donuts, specifically novelty donuts topped with Fruity Pebbles and Tang or Maple and Bacon, would be the next cupcake. So far that hasn’t happened and I still live in a donut desert with not a single novelty donut shop within 3 hours drive. Oh, Donut Whole, won’t you please come to Kansas City?

Here’s my donut prediction for 2012:  more allergen- and dietary restriction-friendly donut options will be available.  I suppose it’s not really a prediction since I’ve already sampled some of the new offerings.  I’ll be back soon to tell you about them.