Whew!  It took me slightly more than 40 days to get in 40 of my Favorite Things.  Maybe I wanted to stretch it out as long as I could.  I had more fun that I could have imagined celebrating all forty of these things.  Here are the final ten. 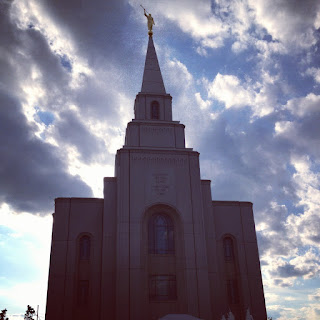 #31.  Take a Tour.   I grew up in a manufacturing community and my parents would often take us on tours of factories, historic sites and anyplace else that might be interesting when we were on vacation.  I still go on a tour anywhere I can, it’s a great way to learn about something I wouldn’t otherwise give a second thought to.  I’ve toured cheese factories, a famous cereal factory, a baseball factory, numerous breweries (which is funny since I don’t drink beer), a couple of chocolate factories–one huge and one tiny, a coffee roasterie, a dairy or two, a manufactured home factory, a dinnerware factory, several car plants…you get what I’m saying, I’ve been on lots of tours.  This time, I went not to a factory tour, but a tour of the new Mormon Temple in Liberty, MO.

Growing up in Northwest Missouri, I’ve had a bit of exposure to Mormon history.  It hasn’t all been shared in a positive light, I can recall as a child many in my hometown speaking poorly of Mormons who had relocated to our area.  I’m still not sure I understand that, as I know many super nice Mormons, they just have a different belief about God than I do. When I moved to the KC area, Mormon missionaries lived in our neighborhood and would often visit on their walk home if I was out in the garden.  I found them to be pleasant folks and they never attempted to force me to hear about their faith.  This was also the case at the tour of the new Temple.  It was a lovely explanation of what happens within the Temple, who can enter the temple after it is dedicated and why Mormons believe what they do.  I did not take photographs of the inside, but can share that it is stunning.  And even though I do not share their faith, I felt a sense of calm in the Temple.  It was beautiful.

#32.  Go to the Nelson-Atkins with Mary.  Mary and I started going to the art museum together three years ago.  We went on a tour (see, I told you I like tours) that was themed Women In Art. This time we went to see the World’s Fair exhibit.

I went to the World’s Fair in Knoxville, Tennessee in 1984.  I was twelve.  I don’t remember a whole lot about it and am afraid the memories of it and EPCOT may have run together, as there were definite similarities.  The exhibit at the Nelson showcases the World’s Fairs until the early 1900’s and includes an impressive Tiffany collection. 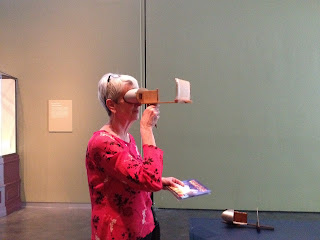 One of my favorite things at the exhibit was this pre-Viewmaster 3-D viewing gizmo.  There was also an older model Sawyer Viewmaster there.  Viewmasters were introduced at the New York World’s Fair in 1939. 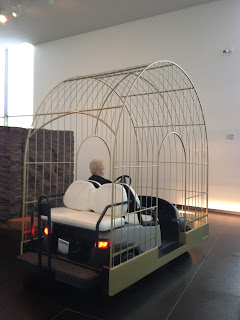 I also enjoyed getting a lift in one of the Shuttle Carts at the museum.  We rode in the Gilded Cage cart, designed by KC artist Peregrine Honig.  Mary and I would both usually walk, but the museum volunteer Judy offered, so we took her up on it.  I kinda want to become a museum volunteer now, if they would let me drive one of these! 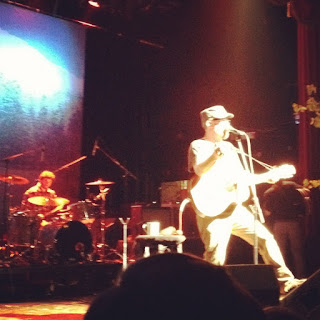 #33.  CAKE concert.  One of my absolute favorite bands to see live.  And being two people back from the stage is always a plus.  It was a fun concert. 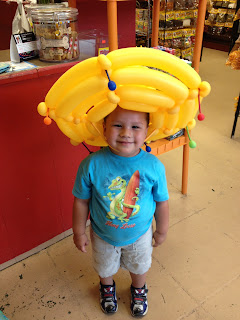 #34.  Surprise Balloon Hat.  I love surprising people with a balloon hat.  On Cinco de Mayo, I had a balloon sombrero left at the end of the day and decided to take it to my friends at La Tienda Chiquita.  Their son was at the door when I arrived and quickly took a liking to the hat.  I love making people smile with a little balloon silliness! 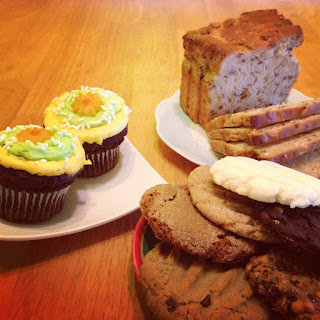 #35.  Indulge in Treats from a Gluten-Free Bakery.  I wasn’t sure I would make this one happen, since I’m not a big fan of any gluten-free bakeries in my immediate area and work didn’t permit much travel.  But SURPRISE!  Mary called and she was driving back from Minneapolis with a surprise delivery for me.  She brought a bag of goodies from Bittersweet bakery.  The sunflower loaf was some of the best gluten-free bread I have ever had.  The cupcakes reminded me of grocery store cupcakes, with that oily frosting that coats the roof of your mouth.  I’ve missed this kind of sweets!  The cookies were all delicious, the pretty white one was the most pucker-y lemon treat I’ve tasted.  I hope to visit this bakery one day. 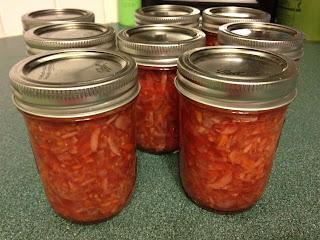 #36.  Can.  I love canning.  It’s usually an end of season project for me, but I found myself with four pounds of radishes left after my birthday party and decided I should use them for canning.  I’ve never canned radishes before, but it worked well.  I made radish carrot relish, which has a hefty bite of ginger in it.  I’ve been eating it on hot dogs mostly.  I will need to find some other uses for it, as I made 18 half pints.  And I also managed to remove two spots of paint from my relatively new stovetop.  My trusty oven is now sporting her first war wounds. 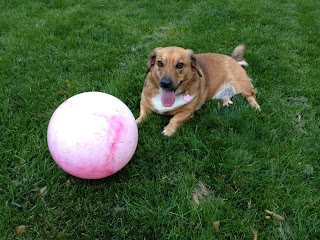 #37.  Play ball with Izzy.  To the best guess of us and the vet, Izzy is a dachshund/Bassett mix.  She is low and slow, never in a hurry.  She spends much of her day sleeping and drooling on the sofa. Occasionally, she will steal a toy from the other dogs and walk around the house with it in her mouth, but there’s no real playing going on.  On even rarer occasions, she musters up all of her stored energy to chase a pink ball around our backyard.  I only get to toss it two or three times before she is done.  On this particular day, she tuckered out quickly. 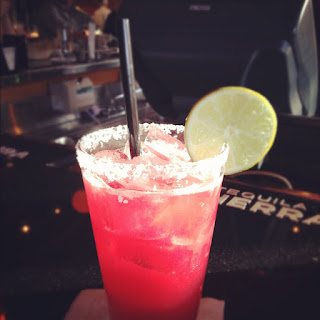 #38.  Go to a #BlogKC event.  I’ve only been a member of this group of amazing bloggers for a few months but have learned so much from them.  I’ve been to educational seminars, brand-hosted events, learned a little about food photography and made great friends because of this group.  We had an impromptu gathering at Mestizo, where I indulged in a Jamaica margarita.  I left this gathering with a bit of information that will help me grow my blog, as is always the case with this group of talented gals.  Grateful for them!

#39.  Meet an On-Line Friend In Person.  I love meeting folks I only know in the virtual world.  (I actually enjoy meeting people period, but this is one of my favorites!) Sometimes I meet them at an industry convention or at a blog conference.  I could not have planned this meeting, as it took me totally by surprise. I never imagined I could have added this to my list, because I didn’t have time to travel to make it happen. 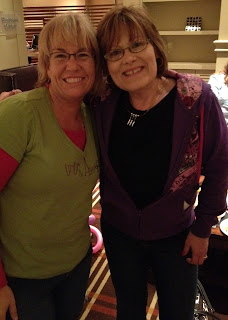 There was an international clown convention in KC recently.  I’m not a clown but went to the convention hotel the night before the convention started to see a friend who was attending the convention and to connect with other balloon professionals.  After about an hour with a group of folks, most who I did not know, one of the gals said, “Where do I know you from?”  It was my friend Julie, a fellow balloon pro who I met on-line and have since discovered shares my passion for fitness and nutrition.  What a terrific surprise!

#40.  Host a Gluten-Free, Vegetarian Event.  I don’t often get the opportunity to host dinner parties or gatherings at our home.  When I do, I worry our guests will be less than accepting of the tofu roast served at Thanksgiving or complain about the lack of dairy-rich dip for veggies.  I decided this challenge had to be part of my Forty Days, because as I mentioned earlier in the list I do love sharing gluten-free sweets. 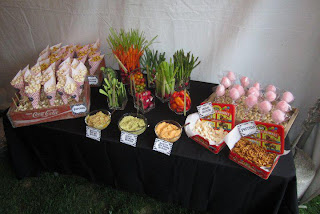 Instead of simply sharing sweets,  I decided to host an entirely gluten-free, vegetarian gathering of a bunch of friends, my own birthday party.  We had gluten-free tofu dogs on gluten-free buns, ten different gluten-free desserts–all but one dairy-free and many vegan, gluten-free cocktails…and most importantly, we had a great time. The only gluten served was in beer, the one non-negotiable for the Mr. so I agreed to offer both gluten-full and gluten-free beers.  If anyone felt deprived by what they were eating, they sure didn’t tell me.  Instead, one of my neighbors said, “I know this is your party, but it feels like a party for me.  I can have EVERYTHING here.”  It was absolutely delightful to see folks with Celiac disease, wheat allergy, Vegans, carnivores and every combination of dietary eating you can imagine dining side-by-side.  If I had to pick one favorite from my list of 40 Favorite Things, this might be it.  Everyone eating together, safely, makes me giddy, elated, happy to the very core.

Thanks for tagging along to the very end on my 40 Days of 40 adventure.  I sure did have fun!