This morning I went to see a DC-3 airplane lifted by a crane, placed atop The Roasterie, my favorite coffee roaster in Kansas City. It was an incredible site. 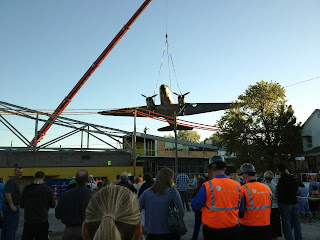 A few hundred folks gathered at the break of dawn and stayed until mid-morning.  I spotted a couple friends and a handful of KC’s well-known chefs.  Plenty of folks in the crowd were wearing military aviation caps and TWA shirts.  I saw Danny O’Neill, founder of The Roasterie, mingling in the crowd.  He stopped for photos with lots of people, including this group of Douglas C-47 pilots. 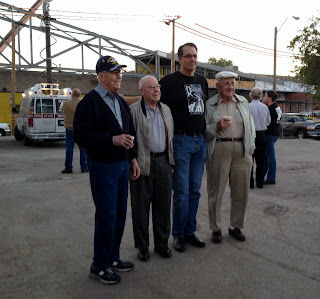 But it was not without controversy.  While reading the numerous tweets about the plane being installed, I noticed some folks didn’t share in the joy. They thought it was disrespectful on 9/11 to install a new landmark, specifically a plane.  Or maybe just to be happy today.

So here’s my thing…it’s a bit of a rant, which is unusual for this girl with a major Pollyanna affliction.

On 9/11, I watched with the same shock and sadness most of us did.  It seemed everyone knew someone who knew someone who lost their life.  It felt like the very core of being American had been threatened that day.  And for a girl who makes her living selling happiness (I’m a balloon artist in the real world), I didn’t think people would ever celebrate or smile again.

In the following months, I watched many of my peers struggle.  Folks weren’t throwing parties. Ultimately some closed up shop.  I was fortunate,  living lean with only a family of 2 to support and a little tucked away in case of a rainy day.  It rained and rained for days for all of us in the special event business.  But I kept the faith that American business would rebound, we would show them. You know THEM, the ugly terrorists.

For me, that’s what happened this morning.  Danny O’Neill and The Roasterie folks showed THEM.  They stood tall on a day when it’s most important for all of us to refuse to be defeated, to uphold what it means to live the American dream.  Part of that dream for many of us is owning our own business and succeeding.

On a day when we are bombarded again and again with very graphic, horrifying images of airplanes, I appreciate that The Roasterie used a plane to create good memories.   I will take more than a few moments out of my day to honor those that passed on 9/11 and those who have sacrificed since…and also to be proud of how we have rebounded in America. We’re still standing tall and dreaming big.  Sometimes that means putting a big ol’ airplane on top of a building. 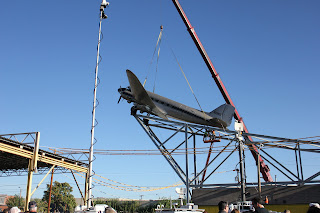