Yesterday I went with my favorite fella to a screening of American Meat.

Yep, two vegetarians went to a screening of a film that is a pro-farmer look into the challenges American beef, chicken and pork producers face.

I’m not opposed to those who eat meat.  It’s not right for me, but I think other people may thrive as meat-eaters.  I thrive on a plant-based diet, but can’t choose for everyone, nor do I want to.  What I do want to do is help people better understand where their food comes from. This film does an excellent job of that!

Unlike some food documentaries, this film isn’t pushing a vegan agenda or using hidden camera footage to show what happens in factory farms.  Real farmers share their stories, their challenges and their successes.   If nothing else, in viewing this film you’ll gain an understanding of where your food comes from and hopefully it will encourage you to buy more local, minimally processed meat. You know, if you’re gonna buy meat. 😉 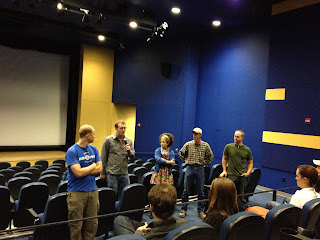 After the film, there was a short panel discussion moderated by director Graham Meriwether, featuring Chef Michael Beard from 715 (read my post about eating there), Brooke from Bad Seed, Tom Parker of Parker Farms and Alex Pope of Local Pig.  After the panel discussion, there was a reception featuring food from Local Pig, however it was after 9 and I have an early start on Mondays so we passed on it.  (Once other local bloggers share their thoughts on this film, I’ll include links so you can read about the food served at the reception.)

My big takeaway from the film doesn’t really have much to do with meat itself, it has to do with helping people switch to a healthier diet.  An audience member asked Graham Meriwether how to best encourage people to switch to ethically raised or organic meat.  Graham related a story told to him by Richard Morris, who was  featured in the film and lost 160 pounds by changing to an unprocessed diet.  Richard Morris shared that shouting at people about his diet change, asking them to drop their McD’s burger, didn’t work.  What did work was inviting folks to dinner, not making a big deal of what was being served, and then discussing it once the incredible flavor of the meal was discovered.

This is perhaps my greatest challenge.  I relate to this story of losing a lot of weigh via healthy eating and I want everyone to know RIGHT NOW how much better they would feel eating good food.  I recently asked my mentor Eva Rawposa for advice on this very subject.  She encouraged me to plant seeds, not trees…and to understand what I have to share is best heard by those who are ready to make changes.

Last night’s audience was, at my best guess, comprised of those who already get the importance of making the change to food that is raised ethically, perhaps using organic methods, buying locally and understanding where your food comes from.  I hope each of us has a chance to share, to plant a seed, with someone who didn’t see the movie.

And about that…you can find a screening of American Meat near you OR you can host a screening. Whether you are a farmer, a gardener or an eater,  I really hope you’ll see this film.  It’s important to the future of farming and the future of eating.

« An Autumn Menu Tasting at Seasons 52
Leavin’ On A Jet Plane..and here’s what I’ll be eating! »