Today’s post is a guest post from my dear friend Debi of Hunter’s Lyonesse.  I adore Debi, her quick wit and tell-it-like-it-is writing style.  Be sure to check out her blog after reading this post.  She shares great tales of gluten-free travel, life and lots of recipes that appeal to not only gluten-free folks but anyone who enjoys a bit of deliciousness. 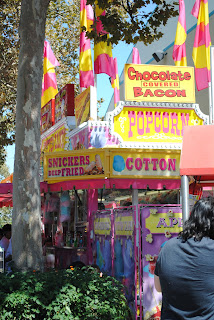 The funniest thing happened on vacation while we were in the car on our way to the Los Angeles County Fair.  Johnna texted me as soon as she saw on Facebook where we were going asking if I wanted to do a guest post.  Seriously.  I had just posted on Facebook minutes before I got the text.  Johnna is funny like that.  That’s just one of the many reasons why I love her and why I said yes. 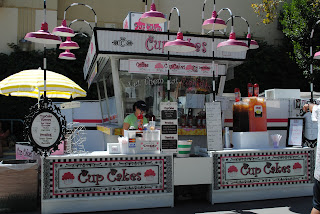 When we go to any type of fair, I never know what I’ll be able to eat that doesn’t have gluten or dairy.  Probably because when I think fair, especially state or county fairs, I think deep fried foods and anything sugary.  So, I tend to avoid fairs.  Unless they are Renaissance fairs and then I can have enough mead that I don’t even care about food.
I joke.
Sorta.
No really.  I love Renaissance fairs.  But I digress.
We went to the Los Angeles County Fair with my bestie and her son, Little Obi-Wan.  I was up for anything this vacation and I had snacks stashed in my camera bag should I need them.  Rule #1 of living with food intolerances and allergies, always have something safe stashed in your bag just in case!
We let Little Obi-Wan lead us around at the fair and the other amusement parks we went to on vacation.  That is, until it was time to move on.  He loved the little hay maze for kids in the animal barn and didn’t want to leave.  The “ride” that was really a big climbing adventure that ends in a long slide, he didn’t want to leave that either.   Tears were shed, but we moved on with the promise of a doughnut at the end.
We finally decided to get some food after a morning full of animals and rides.  I was spotting potential food the entire time we were walking around.  The big potentials I had on my list, giant turkey leg or BBQ.  I was even thinking grilled corn if it was unbuttered.
Then I got distracted by Mediterranean food.   I thought, “Food on a stick!  Perfect!”  I knew I could get a good mix of protein and veggies from it, too.  I figured I’d take the opportunity to be healthy at a fair.
I waited in line forever.  The rather large family group in front of me was very needy and took their time ordering.  And even when they were done, they weren’t done.  It made the woman taking my order very distracted when I was asking her questions about the kebab plate I was wanting.  I will generally ask what comes with something when it isn’t listed.  So I asked what came on the kebab plate and she said the kebab, hummus, and a salad.
“That’s all?” I asked.
“Yes,” she answered staring at the men from the family group who were still being needy.
“Does it come with a pita?”
“Yes.”
See.  Sometimes you have to ask clarifying questions because the people serving you don’t even think about a pita coming with the plate as being important.
I placed my order and waited.
And waited.
And saw my food waiting in the window.  The cashier was too busy taking orders to get it.  Meanwhile the half a dozen people in the trailer were too busy standing around talking to each other to leave the trailer to bring it to me.  Ah, the joys of the staffing at the food vendors. 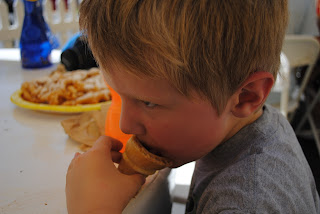 Little Obi-Wan was trying to dig the ice cream in the cone out with his tongue by the time I got to the table and a funnel cake sat in front of him.  I quickly learned he decided Mommy’s ice cream cone should be his.  Who needs funnel cake when there is ice cream to be had? 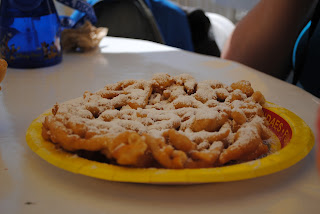 Chaz arrived with a plate of chili cheese fries piled high and shaped like a brick.  I was surprised the plate didn’t break because there was so much on it. 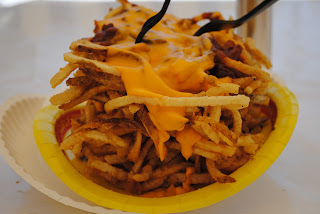 I dug into the hummus.  It was a bit salty.  Almost like it came from a tub.  Which wouldn’t surprise me.  Then there was the “salad” of cucumbers and tomatoes.  Nothing really to write home about.  It was plain.  And the kebab.
Oh, the kebab.
It disappointed.
It was bland.  Flat.  Lackluster.  Dry. 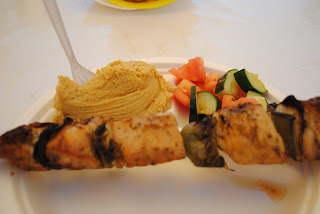 I sat there wishing I had stuck with the idea to get a giant turkey leg.  I kept eating just because I was hungry and I knew I needed the nourishment.  Only when I knew I had enough to hold me out for a few more hours did I stop.  I normally only stop when I’m full.  I hate that I wasted food, but I just couldn’t keep eating more than was enough.  My bestie at least tried it when I was done.
It wasn’t a horrible fair experience.  It was just a horrible fair food experience for me.  I had a perfectly great time outside the lunch disaster.  Watching trains with Little Obi-Wan.  Checking out the wool that my bestie goes to the fair to buy.  Walking through the buildings filled with vendors.  Looking at the collection of Mr. Potato Head figures and Nancy Drew books.  Cheering Little Obi-Wan on as he participated in a few games.
The best part was just being with Chaz, the bestie, and Little Obi-Wan. 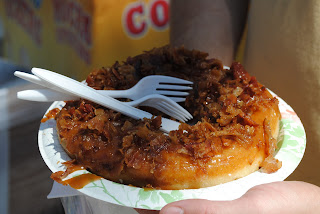 Although Chaz and Little Obi-Wan would probably argue that it was the massive doughnuts they got as we were leaving.   Little Obi-Wan’s plain doughnut sent him into a food coma in the car and Chaz decided to forgo dinner after all the calories he consumed from the Maple Bacon Doughnut.  If I could have had a doughnut, I would have gone for the Maple Bacon Doughnut, too.  That bugger smelled amazing.
Thanks to Debi for this terrific guest post. I almost feel like I’ve been to the fair after reading this and looking at the photos!  Drop by her blog for more gluten-free travel and recipes.
« Pumpkin Alfredo with Sweet Potato Noodles
Cherry Chocolate No-Bake Donut Holes »