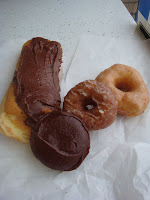 I headed out on Sunday morning with my hubby in tow to Holt’s Do-Nuts at 1325 Main Street in Grandview, MO. We didn’t get an early start but thanks to daylight savings time, everyone seemed to be running late on Sunday and a good selection was still available at 9 a.m.

It was immediately apparent that Holt’s has been in the same spot for many, many years with teal and white striped fixtures, a non-electric cash register and vintage donut making equipment visible through the windows. We were greeted by a friendly gal who said she has worked at Holt’s for 15 years and the original owners since the 1970’s only recently sold to a new owner. The new owner is carrying on the Holt’s tradition–everything is made in house, from dough to frosting to the cinnamon glaze.

We sampled the chocolate cake with chocolate frosting, which was thick and creamy and would have been perfectly at home on a cupcake. The glazed donut was good and just the perfect size. The filled long john was a real treat. Their long johns are split in half, like a hot dog bun, and the pudding or creme filling is then spread on the inside, guaranteeing filling with each bite. YUM! 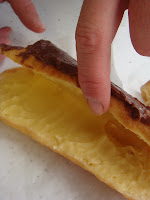 With two tiny tables, Holt’s is not an overly social place to have a cuppa with your donuts, however it was very enjoyable to talk to the gal selling donuts and a steady stream of people came through the door during our visit providing for great people watching. One little cutie asked for donut holes, but they don’t sell them. They did have small bags of tiny cake donuts which seemed to satisfy her cravings.

After we had devoured our selections, it was time to pick out a few extras to take to Em. We snagged a sprinkle covered chocolate donut and a creme filled long john. The gal behind the counter insisted we should take one of the cinnamon rolls with us, as they are customer favorites and the glaze is tasty. We were convinced and loaded up the box of goodies for delivery later in the day.
Here is Em’s take on Holt’s:
“The filled long john was really tasty – loved the chocolate frosting shmeared on top. Almost like cake frosting. The cinnamon glazed was good, better when warmed up. But the eternal question: is a donut a donut if there is no hole?”

I don’t have the answer to Em’s hole-y question, but do know that I would eat at Holt’s again AND try to snag a tour of the donut making equipment. Great place! 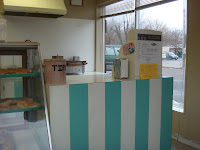