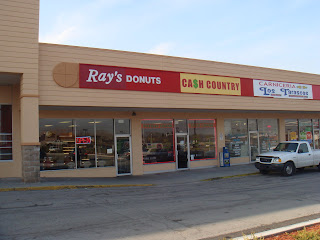 Sunday I went to Ray’s Donuts with my hubby. He recalled a Lamar’s previously being in that location, which would explain the two-tone signage on the storefront. As we were parking, I commented that the last donut shop I visited next to a payday loan establishment had been dismal and I hoped for a different outcome this time.

There is no seating at Ray’s, just a steady line of people waiting to get their weekly donut fix. Two ladies were working behind the counter. The one who helped us was all business, not much interested in the chatter of this donut fiend. I did get out of her that the location had indeed been a Lamar’s, that it has the same owner as it did when it was a Lamar’s location but that the owner has chosen not to buy the franchise rights. 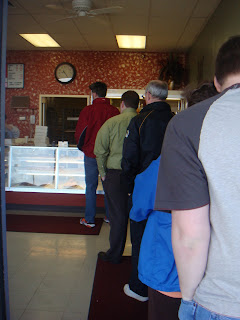 We selected our donuts, including some that wouldn’t typically be on my list such as a German chocolate twist and a cherry bow-tie. While driving home with the box of donuts, I started wondering if Ray’s was still using the Lamar’s recipe and creating the same specialty items so we stopped by the Liberty Lamar’s. Guess what? Lamar’s had the same German chocolate twists! I decided a taste comparison was in order and bought a regular glazed (my baseline for all donut testing) at Lamar’s.

While Ray’s may be making some items similar to when they were a Lamar’s franchise, their glazed donut has a distinctly different flavor than the one from Lamar’s. The Lamar’s donut had more spice flavor in the batter, cinnamon and nutmeg, where the Ray’s donut had a sweeter taste to it. 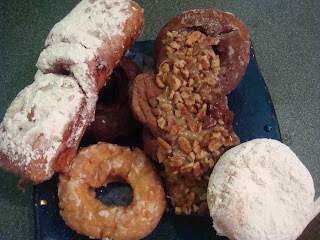 I tried a bit of the German Chocolate twist and would pass on it again. Just icky, sticky and sweet without any distinct flavor in the nuts or the frosting. The cherry bow-tie had very limited cherry filling, it was spread with just enough to turn the dough a light shade of pink but the cherry flavor was not apparent. The sour cream donut was not that melt-in-your-mouth variety that I love. My hubby was disappointed in Ray’s as well. It must be something about the proximity to payday loan shops…

Next Sunday is National Goof-off Day, which sounds like the perfect excuse for a really wacky donut adventure. The plans aren’t set yet, but we’ve still got a few days to cook up something fun and hopefully tasty. Suggestions are always welcome!