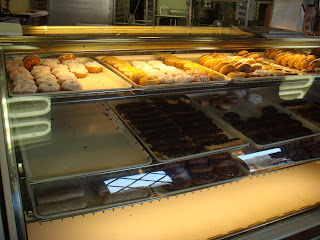 I celebrated National Goof-Off Day yesterday by sleeping in just a bit, which made for a slightly frantic dash for a donut. What if I had missed all of the good stuff? What if the donut shops were closed by 10 a.m. because everyone else got up early? What if, gasp, I had to eat a chain or grocery store donut? Yikes!

Thankfully, Ridgewood Donuts still had a great selection. They were out of raised glazed donuts but still had lots to choose from.

The cheery girl behind the counter told us Ridgewood Donuts opened in 1956 and is still using the original recipe. Ownership changed about 10 years ago but from the looks of things in the open kitchen, the Ridgewood donut making is still true to it’s 50’s roots.

Ridgewood has two tiny tables near the bakery cases, which made for great people watching. A steady flow of folks were still streaming in the door after 10 in the morning. One couple, probably in their 60s, was telling the counter staff they had moved to Texas 20 years ago and on this, their first trip back to KC, Ridgewood Donuts was at the top of their list of places to visit. That’s a pretty good recommendation for a donut shop! 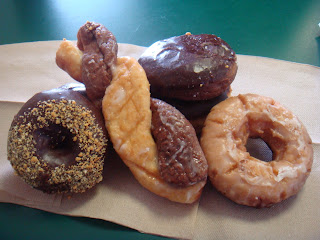