I headed out in the slushy snow Sunday morning for a donut. A friend had suggested two bakeries, one in North Kansas City and one just across the river. I zipped through North Kansas City first, only to find the recommended bakery is only open Monday-Friday. Off I went, crossing the river bridge to the second recommended location which was also open Monday-Friday only. Still feeling slightly adventurous, I turned to the trusty GPS (I’ve named him Nigel) and it directed me to a donut shop on the Independence Square. It’s not really a donut shop, instead it’s a deli and bakery, and it is also closed on Sunday. Three strikes, yes, but I was not going to pass up my weekly donut that easy. I do need to plan a little more carefully though!

By now it was approaching 10:30 and the good donut selection was surely dwindling. I was also running out of time before I had another commitment. Back across the river I went, heading to the trusty Lamar’s in Liberty. I had been saving Lamar’s as an emergency donut visit, in case the weather got too bad to go too far from home or if I had run out of other options. Instead, I found myself there early in this adventure, just thirteen weeks down.

Many people swear by Lamar’s donuts. I have never been a big fan. They don’t sit well in my tummy and I don’t find them particularly flavorful. I know they are a Kansas City original and I do feel some obligation to write favorably about their donuts…but I just don’t like them. The night before my Lamar’s visit two people had raved about Lamar’s and another friend went on and on about them yesterday afternoon after hearing me complain about a wasted week of sweet deprivation, only to spend my donut ticket on Lamar’s. My tastebuds must be seriously out of whack, or perhaps I’ve been spoiled by too many really yummy, but not easily obtained, donuts.

The strip mall location of the Lamar’s in Liberty is a counter-only establishment with no tables. The donut selection was still plentiful at nearly 11 in the morning. I grabbed a wide assortment in a box, including the famed Lamar’s Bar filled with Chocolate Fluff. They might as well call it the diabetic coma donut. Disgustingly sweet, as was the peanut butter frosted donut. The glazed donut was pretty good, nice and fluffy but slightly dry. It was the only donut I would consider having again.

With lunch time quickly approaching, lots of folks were still buying donuts. One guy ventured in to get a dozen chocolate Lamar’s Bars and the girl behind the counter carefully wrapped each one with it’s own wax paper. The donuts were treated with the reverence of a famed pastry and everyone seems to like them, except me. A full tray of the chocolate Lamar’s Bars appeared from the kitchen and the people waiting in line joined together in an audible celebration of sugary goodness. I abstained. 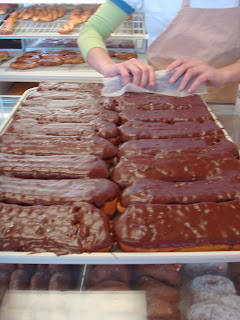 Please, dear readers, share with me your insight on Lamar’s. I feel inclined to discover the goodness of a Lamar’s donut. Now that I have sampled so many local donuts, I expected to fully understand why there are so many rabid Lamar’s fan, but I feel even further away from understanding the adoration now that I have sampled a wide variety of their offerings.