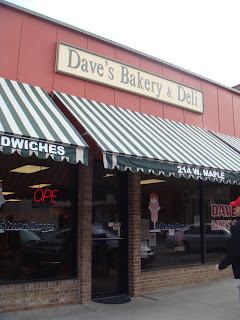 I delayed this week’s donut adventure by a day so I could visit Big Momma’s, which is closed on Sundays. I headed out early Monday morning to visit this famed bakery in Raytown, only to find they do not offer donuts any longer. Not since October 11th of last year. Bummer. I bought a couple of Mini Momma cinnamon rolls to share with friends (who said they were terrific and loaded with sugar) and headed off to another donut location that is also closed on Sundays, Dave’s Bakery and Deli near the Independence Square.

Dave’s is a counter service restaurant with a large menu of sandwiches, fried food and a few salads. The bakery case had a decent variety of donuts and I selected four to share with a donut buddy. The sugared raised donut was so dried out that it had a brittle, flaky crust on top. The blueberry cake donut had absolutely no blueberry flavor. The long john filled with pudding and the chocolate frosted cake donut were the best of the bunch. The chocolate frosted cake donut was moist and had the frosting had a nice flavor. 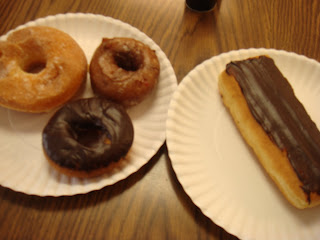 Nearby ten older men sat drinking coffee and telling war stories (literally), an elderly lady was having a scrambled egg and coffee and several folks wandered in for morning coffee or sodas to go. It seems to be a popular place with locals, but I didn’t notice anyone else buying donuts in the 15 minutes or so I was there. Dave’s Bakery & Deli is located at 214 W. Maple in Independence, MO.

My donut journey has become challenging. It is already hard to find a different donut establishment each week without driving a lot. I am thinking of making a few modifications to the original plan, such as visiting one donut shop a week but not necessarily on the weekend. And if that doesn’t help, I’m going to use a tiny circle-shaped cookie cutter to make holes in any yummy baked good that crosses my path, thereby creating donuts out of just about anything sugary and sweet.

I’m still searching for more donut recommendations. Thanks for all of the suggestions so far!!