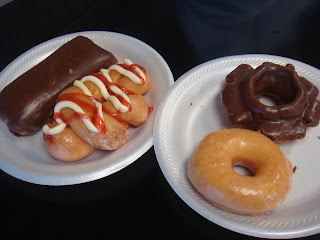 Another weekend without a donut adventure meant hitting the road early on Monday again this week. We (me and my hubby) headed out in the rain to Grain Valley, MO, to visit Goldie’s Daylight Donuts.

Located at the end of a newer strip mall, Goldie’s is a tiny little spot with two high-top tables and stools. As we entered, a lady was picking up 3 boxes of donuts from the friendly fella behind the counter, owner Bryan Pepper. The bakery case is not huge but a wide variety of donuts was available and plenty of coffee options, too.

We asked Bryan for one of his favorites (the chocolate old fashioned) and also got a raised glazed, a chocolate frosted-pudding filled long john and a strawberry-cream cheese frosted dough-knot. The old fashioned was very tasty with a light and fluffy cake. The glazed was good and quite fresh. I loved the dough-knot, probably because of the cream cheese frosting. I don’t remember ever having anything with cream cheese on a donut before but now think it should be standard fare!

Our coffee came with the freshly roasted, freshly ground beans in the cup and something called a Filter Lid on top . Interesting concept, since it is usually unintentional to have grounds in my coffee mug…the only other situation I can think of where the grounds belong in the cup is at a coffee cupping (think wine tasting but for coffee). It was sort of like French pressed coffee but in a disposable cup.

Bryan asked that we also try his apple fritter, which was tasty, just not as apple-y as John’s Space Age Donuts. I would have it again, along with everything else we tried today. The donuts are not baked in-house, but are delivered fresh everyday from the Daylight Donuts franchise in Odessa. The donuts we had today were much, much better than the previous visit to Daylight Donuts in Excelsior Springs. I’m glad that wrong has been righted!

Goldie’s also offers biscuits and gravy and Chicago style hot dogs. Bryan is an excited business owner and in just a few minutes chatting with him, I could tell he only wants to offer the best, whether that be donuts or hot dogs. His enthusiasm for donuts was refreshing as it has been missing from the last few weeks’ donut excursions.

The donut adventure is back on track this week….good donuts, a good chat and really hot coffee. Let the sugar overload continue!