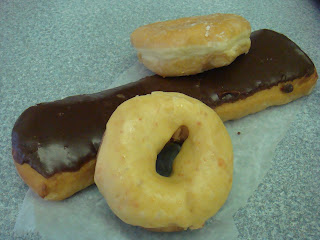 After two weeks of weekday donut trips, I finally had time for a weekend donut shop visit! I did stay out a little too late on Saturday night and was short on sleep, but wasn’t going to miss a weekend donut opportunity. Em showed up at my house early on Sunday morning for our donut adventure and gave me a lift in her zippy new ride to Fluffy Fresh Donuts at 10123 State Line Road in KCMO.

Fluffy Fresh is located in a strip mall, along with Popeye’s Chicken, Mr. Goodcents and several other random businesses. Other than CVS, only the donut shop was open on Sunday morning and was easy to spot with several cars parked at the front door. We didn’t have a long wait in line, only one extremely indecisive guy in front of us, and quickly snagged a nice selection of donuts.

I got an un-filled chocolate long john (which must have been nearly a foot long), an orange glazed cake donut and a raised glazed donut. Em got a powdered sugar cake donut, a cream-filled chocolate long john and a cinnamon sugar cake donut. The raised glazed donut was so soft that it got pretty smooshed when I split it in half. It was very tasty and didn’t have the greasy aftertaste of the Fluffy Fresh I visited earlier this year in Mission, KS. More on that later. The long john was good and not overly sweet, as seems to happen often with chocolate frosting. The orange was interesting and a new addition to the donut flavors I have sampled. I haven’t seen orange offered anywhere else, not even in Florida which seems a likely place for orange donuts to me. The cake donuts were very tasty, very fluffy and well…fresh. Yep, fluffy and fresh. No false advertising here!

Em wisely ordered hot tea, which required the lady behind the counter to bring it to her, giving us a chance to ask her just a couple of questions. Apparently this Fluffy Fresh location is not related to the Fluffy Fresh in Mission. The owner of the State Line Fluffy Fresh reportedly worked for awhile with the owner of the “other ” Fluffy Fresh many years ago. She didn’t share any other details, but I sense there was Donut Drama at some point.

Back to the donut sampling…the cream filled long john was also good with a nice fluffy cream inside. The powdered sugar was good and a conversation regarding the irrepressible urge to lick your lips while eating powdered sugar donuts followed. Of everything I sampled here, I liked the orange cake donut the best. Fluffy Fresh may be a contender for best cake donut in KC.

Fluffy Fresh was pretty busy with the line sometimes approaching the door. A few folks joined us at the small counter to have their donuts but it didn’t have the same atmosphere as John’s Space Age, which would be really hard to beat. And there were no apple fritters.

As I wrap up this week’s donut review, I have a confession to make. This journey began as a way to keep me accountable to eating only one sweet each week and that sweet would be my weekly donut adventure. Last week I stopped at Krispy Kreme to pick up a gift for a friend, a dozen of the cute mini donuts. The minute I walked in the door I was greeted by a lady offering me a warm sample of their donut holes, which are 3 little blobs of dough stuck together. I was unable to resist the temptation and sat in my car enjoying a fix, total junkie style, feeling just a little guilty. I hope to stay on track for at least another 15 weeks before giving in to any additional indiscretions.