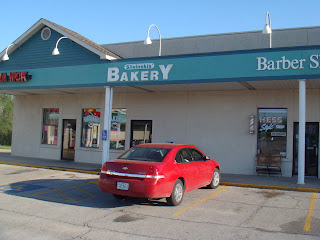 This week I pointed the Donut-mobile north to Kearney, Missouri. An online review claimed Slivinski’s Bakery had the best old fashioned donut in the whole world. That claim required verification.

Upon pulling in to the strip mall, the first thing I noticed was an interesting barber chair sitting on the sidewalk in front of the barber shop, which wasn’t open. It was a motorized barber chair with a 1 gallon gas tank strapped to the back. If the barber shop were open, I would have asked to take it for a spin. Maybe another day…

We entered Slivinski’s and spotted a huge bakery case full of donuts–many more than I expected from a bakery. I’ve been to donut shops this year with a much smaller selection than this bakery! There were raised, cake, filled, glazed, frosted, sprinkled and plenty of other selections to make the decision making difficult. 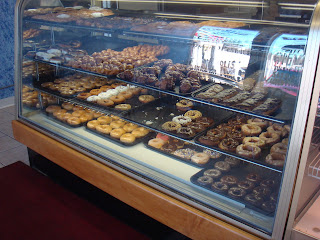 We got a nice selection of donuts, including an old fashioned. The Bismarks were split open and generously stuffed with filling, reminding me of the long john’s at Holt’s Do-nuts in Grandview. Interestingly, the long johns at Slivinski’s were not split open and filled, instead they had the typical frosting hole in the end. Hmm… 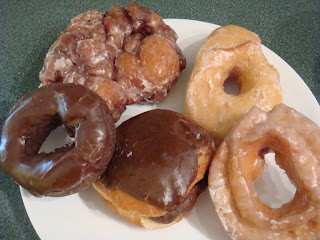 The apple fritter was certainly my favorite of the donuts I sampled today. (Yes, I know it’s debatable if the fritter qualifies as a donut. I’ll remember to put a hole in the next one I try.) It was soft and gooey on the inside with a nice crunch on the outside. It had just the right amount of glaze and wasn’t overly sweet. It was still warm, even after the drive back home and had that delectable melt-in-your mouth quality. I’d like another right about now.

The raised glazed donut was a bit heavy. I prefer a lighter, fluffier donut but it was still very tasty. I don’t think the old fashioned is the world’s best and am still actively seeking my winner for that category. It was a terrific donut, just not quite as good as a few others I have tried. The chocolate cake donut was very tasty and I liked the chocolate filling in the Bismark. Not a single thing that I sampled today would be easy to pass up on a return trip to Slivinski’s. I don’t know how long this bakery has been there and wonder how it has stayed off of the radar of many Northlanders. Their donuts were worth the drive.

While paying and grabbing a cup of Roasterie Coffee, I noticed full pans of cinnamon rolls and pecan sticky buns being prepped for the bakery case. Definitely not a donut, but they sure looked tasty. Someone please go get one and tell me all about it, in great sugary detail!

Slivinski’s is located at 196 W. 92 Highway in Kearney, Missouri, just East of I-35. Get in the car, point it north and enjoy this yummy little bakery/donut shop.