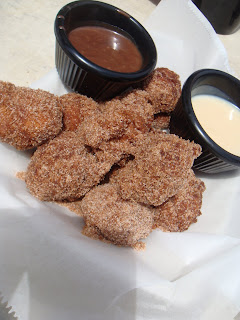 This week’s Donut Adventure took me to Houlihan’s for their Bedhead Brunch, which includes Italian donuts.

John and I met Em and B mid-morning and were a bit surprised at how empty the restaurant was. We don’t eat at Houlihan’s often, I think it was over a year ago the last time we were there. Apparently a lot of folks eat there as rarely as we do and only 4 or 5 tables were occupied.

We grabbed a table on the patio, which seemed like an indulgent treat considering how cold and wet it has been lately. There was a cool breeze but the sun was peeking through the clouds often enough to keep us comfortable. I’d like more days with similar weather!

After ordering entrees from the brunch menu, we ordered a dozen Italian donuts. The menu described them as nutmeg and cinnamon donuts sprinkled with powdered sugar, accompanied with a Kahlua fudge sauce and a white chocolate sauce.

The first thing I noticed when the dis-interested server brought them to our table was that there was no dusting of powdered sugar. I wasn’t sure what the Americanized version of an Italian donut would be. I was expecting something like zeppole, which are made with a yeast dough. Instead, what was served was more like a sweet hushpuppy. John said they reminded him of the corn fritters served at our favorite Gulf Coast seafood shack. B thought they were a bit overcooked as the outside was flaking off from the inside. I’m still not sure if it was the outside of the dough that was flaking off or the super thick coating of cinnamon and sugar.

And then there were the sauces. The chocolate sauce had no Kahlua flavor to it, at least not that I could discern. The white chocolate sauce reminded us of many different things, from the ectoplasm in Ghostbusters to snot to something James Cameron used to slime characters in Alien. The sauces were not served with spoons, but dipping the donuts directly into the sauce proved disastrous. As I mentioned before, the outer crust was prone to flaking off. Dipping them into the sauce resulted in big chunks of crust being left in the sauce. We finally found a server to get spoons for us. After perhaps too much chatter about the sauces, the conversation turned to what defines a donut. B asked if anything rolled up into a ball and fried counts as a donut? It does at Houlihan’s.

I would eat these again, but not to soothe a donut craving. They are more like a fritter or hushpuppy and the sauces were not much of an enhancement. I think they were best without the sauce. It was a super fun adventure with friends, plenty of great conversation and lots of laughs, a few related to the donuts. I hope to do it again with a change of donuts.

The Houlihan’s visited on this donut adventure is located at 8660 Boardwalk Avenue, Kansas City, MO. 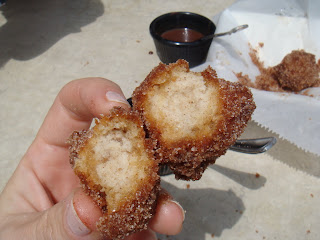