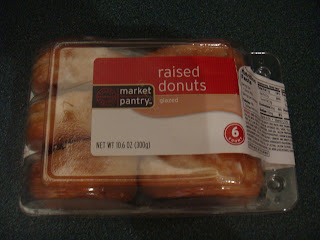 Last week while at work I met a little guy, Daniel, who was celebrating his eighth birthday with his family. I asked him what exciting things he had done for his birthday and he said, “We had Canadian donuts!” My thoughts immediately turned to Tim Horton’s, but further conversation revealed that wasn’t it…

Daniel has an allergy to nuts and his family discovered that the Market Pantry donuts offered at Target are produced in a nut-free bakery in Canada. They had tried to determine if any of the U.S chains can guarantee a nut-free donut and have been unable to. I can only guess that cross-contamination is a huge issue in most bakeries. While I didn’t hold out a lot of hope that imported, probably frozen donuts would be tasty, I knew I wanted to try these Canadian donuts!

I went to my local Super Target and found the shelf of Canadian donuts. While I’m not certain of the details, Daniel’s family did say he eats the raised glazed donuts, not the cake ones because of an additional allergy. So I was after the raised glazed donuts (my favorite anyway) and their spot was empty on the shelf. I found a bakery staff member to help and she said they always have extras in the freezer. I quickly had 6 frozen, raised, glazed, nut-free Canadian donuts in hand AND they were on sale for $1.50. They are regularly $1.99, still a great price for 6 donuts, especially if they are good. These are by far the cheapest donuts I have sampled yet!

The frozen donuts had to sit at home for several hours to defrost while I went about celebrating Mother’s Day. Early in the evening, I came home and popped open the box. I was immediately surprised at how soft, how fluffy and just slightly sticky with glaze they were. Not what I was expecting from donuts that can be purchased on a shelf and come packaged in a plastic clamshell container. I warmed one up in the microwave for a few seconds and dug in…WOW! I didn’t expect an exceptional donut and was so surprised at what I was tasting. The donuts were absolutely delicious, almost as good as a warm Krispy Kreme! The only thing missing was a donut shop experience but the yummy donuts almost made up for it.

Big thanks to Daniel and his family for this donut tip. Now I know where to find tasty donuts close to home when I’m having a serious craving.

I hear rumblings over here at Donut Central that a donut roadtrip may be happening soon. Watch for a not-in-K.C. donut adventure soon! 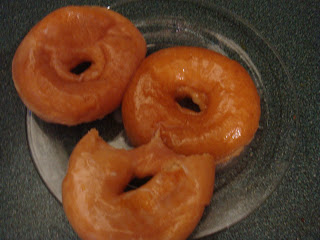