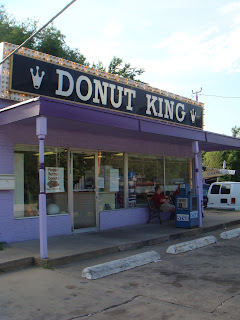 Update 5/11:  After 42 years in the funky purple shack, Donut King has relocated to a sparkly new strip mall.  The original location is part of a road widening project.  Donut King is now located at 2320 Armour Road in North Kansas City, MO. Read about the new location here.

This week’s Donut Adventure was a visit to Donut King, located at 3913 North Chouteau Trafficway in Kansas City, MO. When I first heard of Donut King from a friend who grew up in the neighborhood, I was told to make sure I got there early, as they sell out.  Donut King is now open 5 a.m. to 9 P.M. (that’s right, 9 at night!) 7 days a week and makes donuts more than once a day, so sellouts are no longer a problem. I’ve been to Donut King a couple of other times, enjoying eggnog and chocolate mint donuts and was looking forward to visiting as one of my 52 Donut stops.

John joined me again this week (he’s becoming quite the donut connoisseur!) and we left around 8 in the morning for the short drive to the Donut King. As we were approaching the interstate in our homogenized little ‘burb, we noticed a panhandler and his dog at the top of the off ramp. John wondered where he had parked his car and commented that the dog was just a ploy to pull on people’s heartstrings. I suppose we are both a little cynical. I did worry about the dog who looked to be just a pup and not yet skilled in the ways of panhandling, pulling on the leash and bouncing around as leggy puppies do, dangerously close to moving cars.

With no traffic on Sundays, the drive to Donut King took just a few minutes. There were several cars parked in front, so we parked next door at the Tattoo/Motorcycle Accessories store. Not only is the Donut King building itself colorful, so is the surrounding area. One can have a cocktail at a seedy tavern, get a lap dance, a tattoo, purchase a buy-here-pay-here used car AND get a great donut all within the same block!

Two fellas were sitting out front on the sidewalk on Donut King’s only seating, two benches. They were dressed alike and as we got closer, I noticed they were Quiktrip employees. I asked why they were getting donuts at Donut King since they have their own donuts at work. If you’ve ever been to Donut King, the answer is obvious and their answer was no surprise–the donuts at DK are awesome! 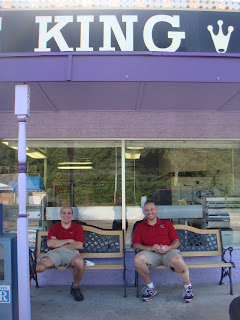 We stepped inside the standing-room-only donut shop and were immediately confronted with a difficult decision. Donut King offers over 30 varieties of donuts everyday plus a special flavor each month. This month’s flavor is peanut butter with a chocolate drizzle. John suggested we get a peanut butter donut and a jelly filled donut, alternating bites for the PB&J experience. Our decision was made more difficult by the “Buy 6 Get 6 Free” coupon we tore out of the local paper this week. We finally decided on six for us and asked the lady behind the counter to duplicate our choices in a second bag for our freebies. We got a peanut butter, a powdered sugar, a cinnamon sugar, an Oreo, a blueberry and a raised glazed donut.

Donut King’s cake donuts are delicious and are very…well, cake-like. Sometimes cake donuts border on being like bread but the DK donuts are like eating a delicious baked cake. There is no greasy residue on the bag when you get it home. The peanut butter, blueberry, powdered sugar and cinnamon sugar were all atop a basic yellow cake donut. There were no blueberries or peanut butter in the batter, just in the glazes on top. The powdered sugar was oddly un-sweet. We both licked the sugar off of our parts of the donut and are still wondering where they get this un-sweet powdery stuff. The Oreo topping was on top of a chocolate cake donut, also very yummy with a nice rich chocolate flavor without being too sweet. The raised glazed donut was unremarkable, but that’s okay because this place is all about the cake donut.

We stopped to talk a little more with the Quiktrip guys who were still hanging out on the front step. I asked if either of them had visited the Quiktrip commercial production facility where all of the donuts delivered to our local QTs are made. Neither had, but both had seen a video of the process and said it was like Krispy Kreme on steroids. Their comments have not quelled my desire to see a huge commercial production facility at some point in this year’s donut journey.

It was time to head back home as a full day of work was ahead of both of us. We had that extra bag of 6 donuts and planned to drop it by Em and B’s house on the way home. As we pulled off of the interstate, the panhandler and his dog were still there. I knew what I had to do, the donuts had to be shared. I pulled up to the red light, rolled down the window and told the toothless fella we had fresh donuts for him. His face lit up and he immediately opened the bag, peering inside at the sugary goodness. While he was checking out the donuts, I asked what his puppy’s name was. He stammered, stuttered and finally managed to say, “Her name is Goofy.” The first donut he pulled out of the bag was the cinnamon sugar. He broke it into two pieces and laid both of them on the ground for the dog. My heart is warm with donut love for the rest of the day. 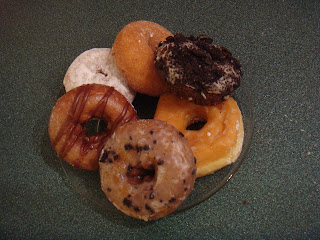