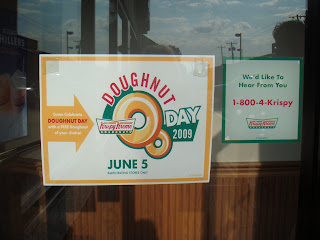 Friday was National Donut Day, the High Holy Day of the Donut Kingdom and I had big plans to celebrate. I had planned a menu that included a donut in every meal for the whole day. And then came the recommendation from the doctor that I eat a gluten-free diet for the next three weeks. What’s a donut girl to do?!? It took a bit more planning, a lot more cooking and a serious change of plans for the day but the celebration had to go on!

I started National Donut Day off exactly as planned with a trip to Krispy Kreme with John. They were giving away a free donut of your choice and one should never pass up a free donut! As we pulled into the parking lot, we saw a huge van full of Mennonites, several of them carrying Krispy Kreme boxes. We had a good laugh about a group of people known for their baking skills stopping at Krispy Kreme. 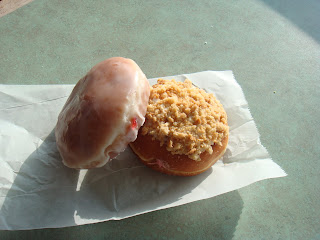 John was going to score big at Krispy Kreme, since I couldn’t eat anything there. We picked out our two free donuts and bought one. I feel a little bad going someplace and only taking the free thing, so we did buy one extra donut. John got three yummy donuts and we headed back home for my first donut baking adventure and a bit of donut-y breakfast.

While John inhaled his Krispy Kreme donuts, I had Apple Cinnamon Donut Holes from Olivia’s Oven, a local Gluten-Free bakery. It was just a couple of weeks ago that I had a conversation with Michael at the Donut Whole in Wichita about the difficulty of making a Gluten-Free donut. Even though I have enjoyed other goodies from Olivia’s Oven, I wasn’t holding my breath about these donut holes. Surprise! They were AMAZING! If one could smoosh together a raised donut and a cake donut, you’d have the texture of these yummy little balls of goodness. Absolutely delicious! Em tried one later in the day and said the texture was very muffin-like. She’s right, yet they had that exterior crust of a donut all rolled in sugar and cinnamon. They tasted like Autumn. Yum! 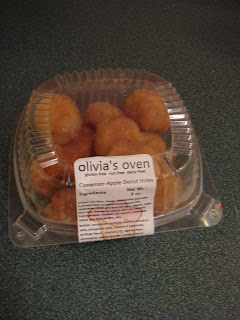 And then it was time for my first attempt at making donuts. While I love donuts, adore donut makers and the donut experience, I lack the skills to be a professional donut maker, especially one that is currently prohibited from using products with gluten. I bought a bag of Bob’s Red Mill Gluten-Free Homemade Wonderful Bread Mix. I used coconut milk with the mix for a little additional sweetness and added a bit of agave nectar. The dough was not at all roll-able so there would be no use for my donut cutter. It was far too sticky to go through the donut maker contraption I bought at the As Seen On TV store. John saved the day by suggesting I put the dough in the mechanical pastry bag from Williams-Sonoma. It did the trick! I made little loops of dough on parchment paper and left them to rise while I went out on the next chapter of the National Donut Day adventures. 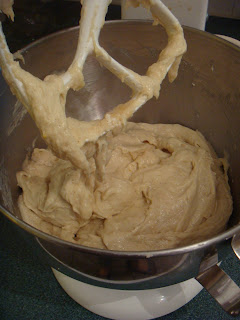 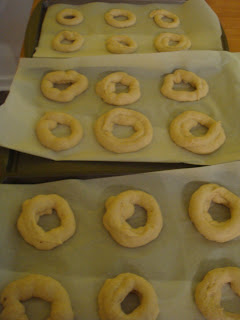 I adore chocolates from Christopher Elbow but have not yet figured out a way to incorporate them into a donut adventure. In addition to Friday being National Donut Day, it was also the debut day of Christopher Elbow’s ice cream and sorbet. Being a fan of his almost-too-pretty-to-eat chocolates, I knew the ice cream would be delicious. With flavors like sweet corn, pineapple cilantro and rosemary caramel, deciding on flavors was going to be tough. I got stuck in a little traffic snarl but still managed to arrive right as the doors opened at 10 and was the first one to order. I got a pint each of Fleur de Sel Caramel, Tahitian Vanilla Bean and Lavender Vanilla for Em. By the time I got three pints of ice cream and paid, the line was getting lengthy. Word of a good thing spreads fast!

Back at home, ice cream safely tucked away in the freezer, it was time to fry the donuts. I can’t remember the last time I fried anything and quickly realized why I eat donuts out. Frying is messy! I heated the oil in a small pan and fried the donuts one at a time, which wasn’t too bad since I only had 18 of them. I brushed them with a bit of agave nectar while they were still warm and they actually resembled a donut. Sure they were gluten-free, but at least they were shaped like a donut. 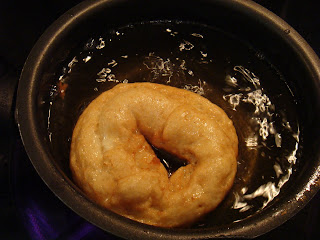 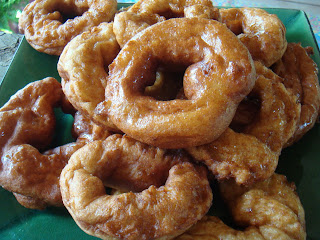 Em came over to retrieve her ice cream and we had warm donuts with the most amazing ice cream I have ever tasted. I am not a fan of ice cream and the last time I recall having ice cream was about two years ago. That said, I’m glad Christopher Elbow ice cream comes in pints and not gallons, because I could make a gallon disappear quickly. It was that kind of good. My favorite was the Fleur de Sel Caramel. While reluctant, I did sample Em’s Lavender Vanilla ice cream. It tasted like Lavender, so much so that Em exclaimed, “It tastes like PURPLE!” Not something I would want a full scoop of but it was interesting to try. And the donuts were yummy, too, a bit like funnel cake. My first attempt at Gluten-Free baking was a success and the donuts were quite good. Not like the ice cream was good and not like my favorite donut shop good, but good in a very unrefined, homemade kind of way.

For lunch I whipped up a homemade Sloppy Joe sauce with lots of red and green peppers and onion and used Amy’s Bistro Burgers for the “meat.” I’m vegetarian and usually use Boca crumbles or something similar to make Sloppy Joes, spaghetti sauce, chili, etc…but all of those products contain gluten so I had to find an alternative. The Bistro Burgers worked well and were a bit heartier than the crumbles. For a bun, I used two donuts. This was inspired by Peculiar Fare’s version with Krispy Kreme donuts. And like the Krispy Kreme version, this was delicious. It was the best Sloppy Joe sandwich I have ever had! 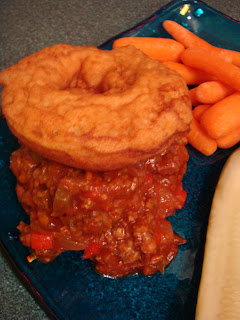 Afternoon snack time rolled around and another donut was in order. I bought frozen gluten-free Kinnikinnick donuts at Hy-Vee and based on the weight of the box, was guessing it contained 6 bricks instead of 6 donuts. I warmed my donut up in the microwave and had a scoop of the amazing Fleur de Sel ice cream with it. The ice cream was good, the donut was just okay. It was very dense and the vanilla frosting was very, very sweet. Unlike eating a fluffy, airy, donut, these donuts let you know you have eaten something. And they are the second Canadian-made donut I’ve tried. Canada seems to have better standards when it comes to restricted-content foods, like peanuts or gluten. 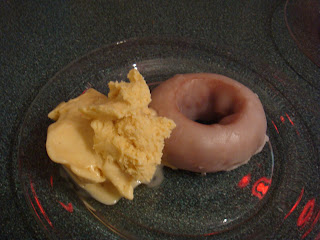 My original plan for dinner was to special order glazed, unfilled long john’s at a local donut shop and then stuff them with a hamburger substitute, cabbage and onions, kind of like Bierocks but with a donut. Em suggested I try something similar but with roasted pears and brie. Since buying a store-bought donut was out, I had to find a gluten-free alternative and came across this recipe for Sufganiyot, a jelly-filled donut served during Hanukkah. I made the dough and it was a much more roll-able dough than the donuts I made in the morning. While letting the dough rest, I roasted the pears in the oven, sliced the brie and chopped up a few walnuts for a little added crunch. 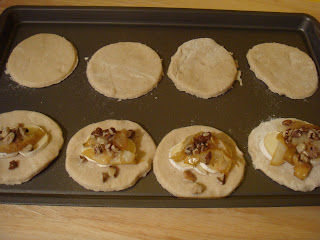 These fried nicely and made a really yummy dinner. The recipe made enough dough for at least 16 so I only used half of it, freezing the rest for another day when I can try the more traditional Bierocks filling. I dusted the pear and brie donuts with a bit of sugar, but this was an otherwise relatively unsweet donut. 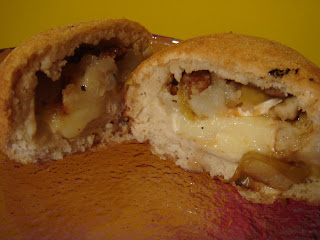 Even though I had to make a few changes to my plan for National Donut Day, it was still a success and I tried lots of new donuts that I would have otherwised overlooked. I learned a lot about gluten-free baking in one day and have so much more to learn. Hopefully I’ll get a reprieve from the gluten-free diet soon, but if I don’t, I know there are lots of donut options still available to me. Or I’ll just tag along with everyone else and blog about their donut adventures!