Last week while driving through Kansas City, Kansas, my hubby John noticed a van emblazoned with a fun logo advertising donuts in a strip mall parking lot. He went to check it out, but was a bit confused because the name on the actual donut shop didn’t match the name on the van. It still seemed like a really good lead in an area of town I had not yet visited on a donut adventure. I found a website for the company advertised on the van, Thomas James Donuts, and agreed with John that their logo is fun–a monkey! Their website listed two locations, one in KCK and Holt’s Donuts in Grandview. I really enjoyed my visit to Holt’s Donuts and recalled the lady behind the counter telling me ownership had changed at Holt’s in the last couple of years, but the new owner was committed to sticking with their in-house, by-hand methods. I was hoping the shop in KCK was filled with as much goodness as Holt’s.

My friend Sheila joined me for the drive to the donut shop. While we didn’t see the van, we did quickly spot the donut shop, just where John said it would be. There sure are lots of donut shops in strip malls around KC! The sign said Nadia’s Donuts. We were the only folks picking up donuts at the time and the guy behind the counter was super friendly. I asked what the connection was with Holt’s and he said it was their other location. I mentioned I write a donut blog and was quickly outed, he had read my Holt’s adventure. He said they would soon be offering more of the famous Holt’s donuts at the KCK location and that is a great thing in my book. 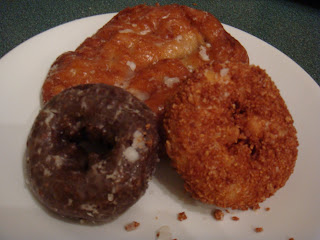 I picked a few donuts to take home to John, an apple fritter as big as my head, a devil’s food cake donut and a cinnamon crunch cake donut. Sheila got about the same thing and we got out of the way so the next customer who had come in behind us could order. I overheard him asking the guy behind the counter what happened to Nadia’s and he said something about them still being around during the transition. Maybe there is new ownership here, just like at Holt’s, and the commitment to good local donuts is going to continue. I sure hope so! 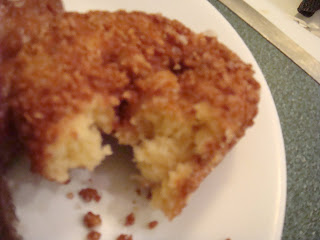 John said the donuts were delicious. What a relief–they really were as good as Holt’s. He didn’t say much about the apple fritter, probably because he was busy going on and on and on about the cinnamon crunch donut. He said it may be the best cake donut in KC. Whoa! That’s a big statement. He then said the devil’s food donut melted in his mouth yet wasn’t mooshy moist, just good cake that somehow became melty. Still not sure if he actually liked this place…

Sheila had the same take on these donuts and while she hasn’t been to quite as many local donut spots as I have in the last year, she’s a bit of a donut connoisseur herself. She grew up not far from the Donut King and has had her share of good and not-so-good donuts. Her only complaint (and she had to dig to find one) was that there was almost too much crunchy stuff on the cinnamon crunch donut. Is that possible?

Thomas James Donuts is located at

My gluten-free non-donut sweet this week was delicious. Not donut delicious, and boy did I want a donut listening to John and Sheila raves about Thomas James, but it was still a great sweet treat. I made the Peach Pie with Brie–Cupcake Style recipe from Stefani at the Cupcake Project. I used the gluten-free pie crust recipe from the Babycakes cookbook. With peaches so plentiful at my local orchard, the timing was perfect! I topped the delicious pie, cupcake style, with a bit of Talenti Hill Country Peach Champagne Sorbetto. Yum! 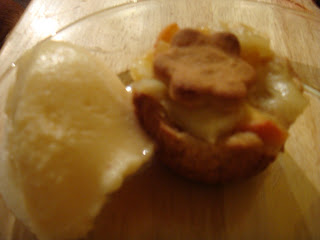