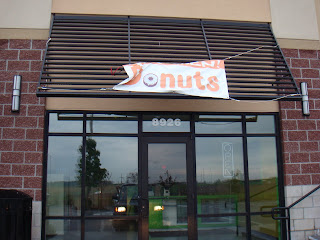 This week’s donut adventure began with a tip from Em. While having dinner at Five Guys, Em and B noticed a banner that said “DONUTS” in a strip of stores in the Tiffany Springs Market area. It was evening, so they had no idea if it was open for business yet or not. I love that my fellow donut fiends are scouting out additional possibilities!

John and I headed out around 8 in the morning to locate this new donut place. Sure enough, there was a little donut shop that appears to be a locally owned establishment, or at least not a member of any donut chain I am familiar with. The interior walls are painted in bright yellow and lime green and it looks ready to roll but was not yet open. Huge bags of donut flour were neatly stacked on the floor and the bakery case still looks pristine, not a single smear of a 3 years old hand was noticed. Something about the interior decor reminded me of the KC Donut Company, but no signage was present other than the outdoor banner so I still have no details…just that we’re getting another donut shop in KC!

Plan B was put into action, a trip to the nearest Casey’s General Store. In the late 80’s, Casey’s opened in my home town of 1,500 people. We finally had a place that was open ’til 11 at night, offered fountain sodas AND made donuts fresh everyday. Oh, and did I mention pizza? Pizza that you could buy one slice at a time? My senior year of high school, I would occasionally sneak away during journalism class with a friend to grab a slice of greasy pizza. We were such rebels. My dad loved to get donuts there and delighted in snagging a box of day old donuts for a discounted price. I recall him being a bit perturbed when Casey’s switched from frying donuts in the store to using a frozen variety that is heated and glazed in the store. But he still kept buying their donuts.

Twenty years later, I still find something comforting about Casey’s. The smell of pizza and donuts is familiar to me and brings back memories. The sight of a Casey’s is a reminder that I’ve stepped away from the city, if just briefly, and it feels surprisingly safe and welcoming. Perhaps that isn’t true but is instead a reflection of my hometown, encapsulated in the aromas of a tiny little convenience store that happens to sells tasty donuts.

We pulled into the nearest Casey’s, located on a two lane highway between our little ‘burb and the KC airport. While we passed cows grazing to get there, we also knew we could be back to all of the conveniences of the city in less than 10 minutes. We needed gas (bonus–gas and donuts in one stop!) so we parked at the pump. A Casey’s employee was smoking a cigarette while emptying the trash between gas pumps. She stopped to have a puff or two while talking to John, who was pumping gas, about how spacious his bitty-SUV appeared to be and then zipped off to the dumpster.

I headed in to check out the donut selection and immediately noticed THAT smell. There is something about a Casey’s donut that smells different from all others. I have no idea what the smell is but it is good! And there was pizza…and cookies…and rice krispie treats. Everything I remembered being so yummy at Casey’s was available for purchase! 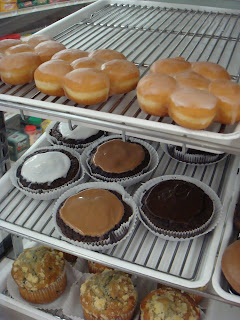 John chose a Pull-a-Part, which is like six donut holes stuck together, a maple glazed chocolate brownie and a chocolate glazed chocolate cake donut. While I couldn’t eat any of these goodies, it didn’t stop me from sticking my head in the bag several times to get a good whiff. I could almost taste them…well, except for that chocolate maple number. I am not sure I have ever had chocolate and maple together but John swears it is good.

As we were paying for the donuts and the requisite gas station coffee, I spotted a box of day-olds. That’s a first on the 52 Donuts journey. My dad would have bought them. 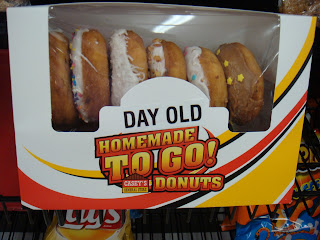 My sweet this week was a tiny white cake from Andrea’s Gluten Free Bakery with fresh strawberries and whipped cream. While not donut good, it was among the best gluten-free sweets I’ve had. 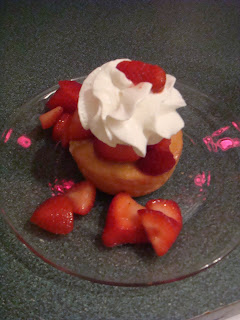