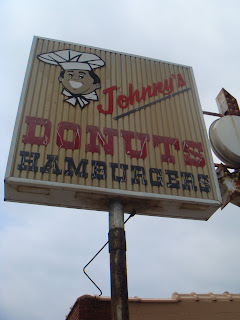 Em and I headed out on Friday morning to grab a donut and make a second stop at Christopher Elbow for ice cream.

Our intended Donut stop was Johnny’s Donuts and Hamburgers. I knew it was in an iffy neighborhood but I often find really good food in such neighborhoods. That is not what we found at Johnny’s.

As we approached, we noticed the parking lot was absolutely empty. Not a single car. Em pointed out there wasn’t even a car for the donut maker. Not easily steered away from a donut, we parked in the empty lot and headed for the door. Em pointed out a HUGE can of bug spray (see pic) sitting on the windowsill of the kitchen area. Ewwww. 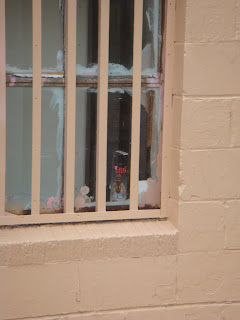 Still not discouraged, we headed for the door only to find it locked. I could see in the door and on a large tray was a mound of donuts, not nicely displayed, just piled in a big mound. Hmm…how bad did we really want a donut? I pulled on the door one more time just to make sure it was locked. The rattling stirred someone inside, a fella wearing an apron, who came to the door to tell me that they were closed until 10:30. I guess we didn’t want a bug spray glazed donut anyway. Sigh.

Off we went for our intended second destination, Christopher Elbow Chocolates. I first had their delicious ice cream on National Donut Day and was looking for an excuse to try more flavors. A donut-less donut adventure provided that excuse.

A trip to Christopher Elbow is always fun, with hundreds of chocolates beautifully displayed, just begging to go home with you. The addition of a hot chocolate bar and ice cream makes it even more tempting! On this trip, I got a pint of the Sweet Corn and a pint of the Chocolate Venezuelan Spice. Em got a pint of Creme Fraiche and a pint of Fleur de Sel Caramel, one of my favorites from the first trip. We split one green tea chocolate and hit the road, all the while Em insisting that we were going to load up the road construction sign that was laying on the sidewalk. Neither of us has been arrested yet on a donut adventure, but she seems determined to stir up some trouble. And I think that makes it just a tad bit more fun. 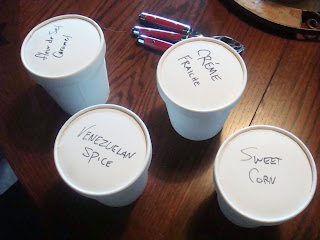 We had an ice cream tasting in Em’s kitchen and I enjoyed all four flavors. If I had to choose a favorite, it would be a draw between the Sweet Corn and the Creme Fraiche. I expected the Venezuelan Spice to have a little more heat to it, but instead it was mostly a rich chocolate flavor with a nice amount of cinnamon, like a really good Mexican hot chocolate, frozen. The Creme Fraiche had a hint of citrus to it–delicious! I raved about the Fleur de Sel Caramel before so will save you from reading about it again, although it is good enough to write about twice.

I chose the Sweet Corn to accompany this week’s donut. I had a Kinnikinnick gluten-free vanilla glazed donut. I dusted it with corn meal and added a scoop of Sweet Corn Ice Cream, sprinkled with sea salt. The salt really completed the flavor of the ice cream. Christopher Elbow’s Sweet Corn ice cream is like the sweetest corn bread I’ve ever had, or maybe a yummy corn chowder. Em makes corn chowder with bacon, so perhaps a sprinkle of bacon instead of sea salt would also be good with this ice cream. 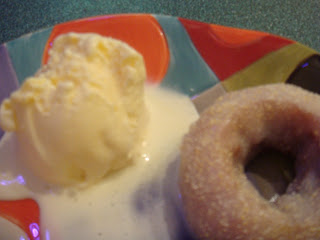