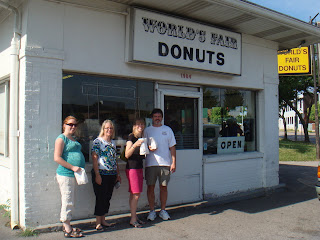 This week’s donut adventure was the furthest I have driven in a car to get a donut. I left home at 4:30 in the morning on July 3rd for the four hour trip to St. Louis. Since many people were off of work for the holiday, traffic was minimal for the entire drive and I arrived right on time to meet my friends who live on the other side of the state.

Jill and I pulled in at about the same time and chatted on the sidewalk near World’s Fair Donuts for just a few minutes before Thad showed up. And just a few moments later Jill’s neighbors Stefani and Jon joined us. I have known Jill and Thad for many years. We’re artists working in the same industry and have been friends for years but I don’t think we have ever shared donuts before. Stefani is a fellow food blogger (you should visit the Cupcake Project!) and Jon is a professional photographer. My two passions, art and food, collided on the sidewalk in front of a donut shop. Conversation flowed before we ever made it to the donuts…but you knew we wouldn’t skip the donuts!

A word on choosing a donut in St. Louis: Since I’m not from the area, I asked around for a donut suggestion in St. Louis. One friend suggested the Donut Drive-In. Thad suggested Olde Towne donuts in Fenton. Stefani put out the call to the St. Louis Foodies and the overwhelming response was World’s Fair Donuts. I trust the foodie community and just from the appearance of World’s Fair Donuts, they sent us to the right place. It is an old school donut shop, complete with a non-stop flow of patrons even late in the morning by donut standards.

World’s Fair Donuts has no inside seating, just a huge bakery case full of every variety of donut one might need on a Friday morning, plus fried pies. I have never seen fried pies at a donut shop before and asked my St. Louis friends if that was a regional thing, but none of them was aware of a huge fried pie trend in the area. Interesting! 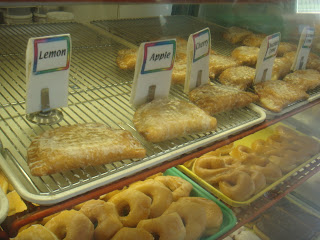 Since I can no longer indulge in regular donuts, I’ll share what Jill said about World’s Fair: “World’s Fair Donuts had 2 coffee sizes, small and large. I was impressed they have not upgraded to the new American sizes. The small coffee I ordered was in a 6oz cup with 5oz of coffee. Other restaurants would call the World’s Fair large a small (or tall,) and the small a free sample cup. Only cost me $.99 for a coffee and cake donut. The donut I ordered was really sweet, but perhaps not to others who eat more donuts; I don’t think I’ve had a donut in years. I liked the atmosphere. Glad to see urban sprawl hasn’t put them out of business.”

I think Jill and Stefani both had the buttermilk donut. Stefani said it had a cinnamon flavor to it, which was unexpected but tasty. I was flabbergasted at the prices. A fifty cent donut is almost unheard of and I’ve paid as much as $2 for a donut.

Donuts and coffee were consumed on the sidewalk before Jill, Thad and I headed to Global Foods. It’s the size of a supermarket, but packed with foods from many different countries. This place is foodie heaven! Each aisle has a sign indicating what country you’ll find foods from. The produce section would have added at least a few hundred more strange fruits to MightyGirl’s 1,000 fruit list. The chocolate area gave me great opportunity to purchase gifts for friends who enjoy Kinder, Milka and Ritter bars. I got a Japanese soda, flavored with lychee, curry ketchup from Germany and several other interesting items that were new to me. I want to go back and spend hours perusing this place!

While I could have spent an entire day at Global Foods, we had lots more fun to pack into the day. We zipped over to Trader Joe’s, loaded up a couple of carts of goodies to bring home and then it was time to say goodbye to Thad before heading to the movie theatre. Jill and I went to see FOOD, Inc. and I think you should see it, too.

After saying goodbye to Jill, I made a stop at another location of Trader Joe’s to pick up frozen treats and noticed a Container Store across the street so had to stop there, too. In a perfect world, my lovely city would have IKEA, Trader Joe’s and a Container Store…and a gluten-free donut shop. Until that happens, I have to pack as much shopping into one day (and one small car) as I can. 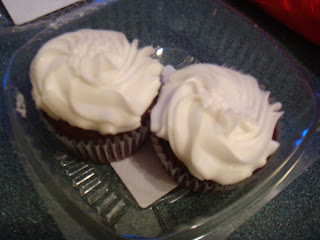 I had one last stop planned. I still had not indulged in my weekly sweet! I stopped in Chesterfield, Missouri at Andrea’s Gluten Free Bakery. I got chocolate cupcakes for my weekly donut substitute and a slew of gluten-free goodies. Then it was time to point the car west, with at least 3 hours of driving ahead of me. Plenty of time to contemplate how I was going to get all of the Trader Joe’s and Andrea’s goodies into the cupboard. It was the perfect day spent with friends, old and new, and lots of food adventures. 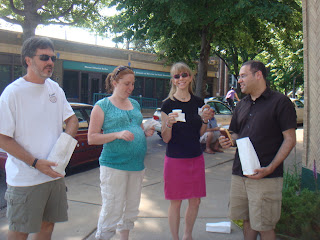