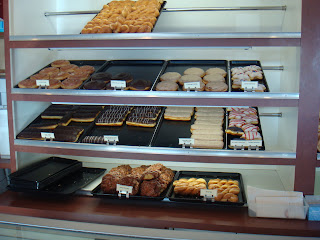 Twenty-six weeks, halfway there! I wasn’t sure at the beginning of this project I would be able to find 52 different donut shops or that I would find the motivation to stay on track with my plan of eating only one sweet each week. I’ve had only one small detour from the one sweet a week plan and am a bit sad that I am halfway through the project–there are still so many donut places I want to visit!

Week #26 brings a bit of change to the 52 Donut Project. As I mentioned a couple of weeks back, my doctor recommended a gluten-free diet. I begrudgingly agreed to give it a try, although I did sneak in delicious, very gluten-y donuts twice in the first three weeks, the final time being last Sunday at the KC Donut Company. With reduced gluten intake, my body has stopped producing the gluten antibodies that allowed me to eat gluten, even if my body was intolerant. Now eating gluten causes discomfort (okay, so it’s really pain and it lasted 4 days), so much so that eating a donut seems unappealing. Can you imagine? A month ago I couldn’t imagine that anything could cause me to not want a donut. Now I know what it takes to get me to stop eating donuts. Okay…so that’s really more than you wanted to know about my health woes but it will help to understand where I’m going with this.

My love of the donut goes far beyond just eating the donut. I love the experience and it has taken this project to make me realize just how much I enjoy sharing food and the experience with friends. The time spent together, the laughter, the occasional snarky quip that accompanies superb people watching…Visiting a donut shop each week is a social practice for a wide variety of people, a practice that crosses many boundaries. I adore it. I am not willing to give up my weekly donut adventure, even if the consumption portion of the adventure must become voyeuristic.

Here is where I need your help: I will need one of you, my dear friends, family, readers, strange donut stalkers, to join me for a donut each week. I don’t want your review of your favorite neighborhood donut shop, I want to go with you to your favorite neighborhood donut shop. I want to enjoy the experience with you, talk about life, catch up, while you have a donut or two or twelve. I’ll have coffee and then I’ll blog about it. Not so different from what’s already going on, just that I’ll be counting on you to tell me all about the donuts. And if the donut offerings include something meaty or exotic, of course you’ll be expected to try it!

And now on to the donut adventure…

Many times I have driven past Judi’s Family Bakery. Located close to a bridge that crosses the Missouri River, I often pass by in an attempt to avoid traffic jams on the nearby interstate. Never once had I stopped in. I tried one Sunday to have a donut at Judi’s but they are not open on Saturdays or Sundays. I went with John for a donut on Friday and the place was busy, busy, busy, even at mid-morning (8:15) by the standards of the nearby industrial businesses.

Nearly always, I ask the folks behind the counter what their favorite donut is. Too often I get the non-commital, “I like them all.” Seriously, no one expects you to like every single donut. You must have a favorite and it’s great if you’ll tell me. I might like it, too. The next scenario usually happens when the owner of a donut shop is present. “I really like the cherry/chocolate-grape/patriotic-sprinkled-in-January donut.” This donut is the one that no one is buying that day, either because it looks unappetizing or is unappetizing. And it is suddenly the owner’s favorite. It goes into every dozen box of the customer that says, “Just give me an assortment.” This week’s adventure started similarly when the guy behind the counter said to us, “We love allllll of our children.” When I pushed for one favorite, he repeated himself. Not one to give up easily, I asked the girl behind the counter. She replied, “I really like the blueberry cake donuts.” Out of the side of his mouth, the guy behind the counter said, “Oh, I HATE those!” Ha! 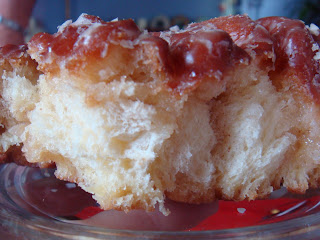 John chose a chocolate old-fashioned, a raised glazed, the blueberry cake and an apple fritter. There were plenty of varieties to choose from, including a star-shaped donut which I have only seen before at Krispy Kreme. There are a few places to grab a seat at Judi’s but we had to get to work, so we took the donuts to go. On the way out the door, I noticed a copy of The Donut Book sitting on a shelf. What a great book to have for folks to browse while enjoying a donut!

While I couldn’t indulge in any of the donuts from Judi’s, I did take a long look and had a sniff of the bag of greasy, fried goodness. The blueberry cake was very blue, lots of blueberries present in the donut. The apple fritter was interesting in that it was nearly 2 inches thick. John said it wasn’t crunchy on the outside (his favorite part of an apple fritter) and there were very few apples in the dough. The apples that were in the dough were all concentrated in one end of the fritter. He said it was more like a raised donut than an apple fritter. John’s Space Age hasn’t had a serious apple fritter competitor for awhile! 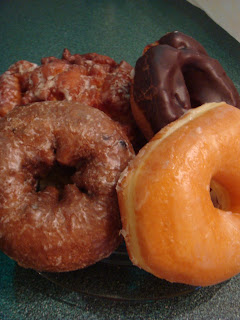 While we had a fun adventure at Judi’s, John wasn’t overly impressed with the donuts. He said they were kinda like getting a donut at Quiktrip, which isn’t horrible just not memorable. I’m glad the experience was.

Next week I’m hitting the road for another donut adventure. Stay tuned…