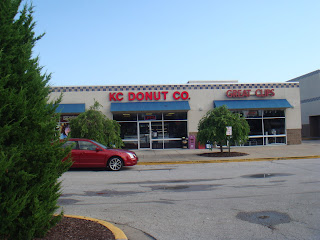 John had spotted one location of the small local chain, KC Donut Company, while zipping through Olathe, Kansas a month or so ago. Further research revealed four locations, all within just a few miles of each other. We visited the location at 2014 E Santa Fe in Olathe.

This location is in a strip mall with a KMart. Nothing else appeared to be open in the shopping area early on a Sunday morning, as seems typical of strip mall donut shops. There was plenty of activity around the donut shop, usually a good sign. 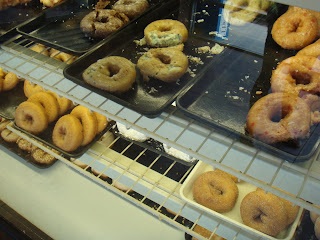 Off we went with our bag for the 45 minute drive home to enjoy the donuts. There is no seating area inside this location of the KC Donut Company. It doesn’t feel like a big national chain inside, but also doesn’t have the character of a decades old, locally owned donut shop either.

I tried both of the peanut butter chocolate varieties and think the frosting was better on the raised donut. I love peanut butter, even more when combined with chocolate, and think this is a great combination on a donut! The German chocolate was on a raised chocolate donut and was yummy. The apple fritter was enormous!

I enjoyed our visit to the KC Donut Company and would drop by again if I were in the neighborhood. If nothing else, I’d stop by just to have one of their bright pink glazed cherry donuts. 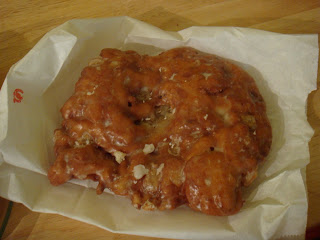