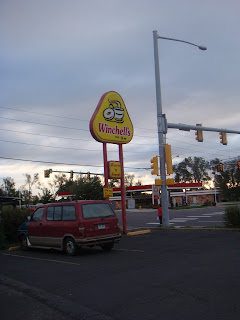 While I don’t often visit one of the BIG donut chains, I have had Winchell’s on my list from the beginning. It seemed important to visit the “time to make the donuts” establishment, however there isn’t one in the Kansas City area so I had to visit one while away from home.

While in Colorado, I noticed there are still several Winchell’s in the Denver area. After working in the mountains near Vail the night before and having an early morning flight out from Denver, stopping at a donut shop on the way out of town looked like a good option. We found the Winchell’s nearest to I-70 and made an early Sunday morning stop. 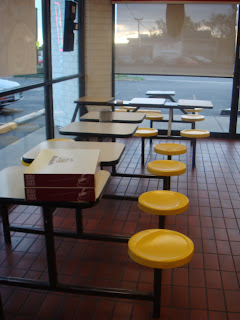 It doesn’t look like much has changed at Winchell’s since I lasted visited on sometime in the late 80’s. The logo, the yellow and brown everywhere and even the donuts seem about the same. I noticed the boxes and bags have a catchy little phrase on them, “With a donut in each hand, anything is possible.” I totally believe that!

A small window provided a view into the kitchen, where two guys were mixing and then plopping out onto the counter a large gooey ball of dough. John had already snagged his donuts and we needed to get moving toward the airport so I didn’t get to see what they were making but there is something reassuring about an open kitchen.

Winchell’s gets the award for having the most pink donuts in their bakery case. I love a pink frosted donut, but not just any pink. It can’t be a really fake, overly-food colored pink. It needs to be a delicate hue of pink that eludes to a strawberry or cherry flavor that isn’t artificial. The only time I really care for a neon pink in my food is when eating a Cherry Mash. Oh, now there’s an idea! A chocolate cake donut with cherry frosting and Cherry Mash chunks on top. If I had to bet who might make such a donut, I’d put my money on Wichita’s Donut Whole. Yum! 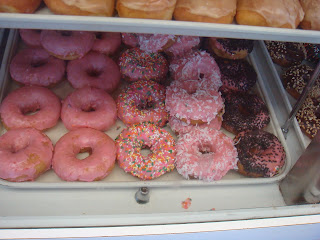 John must have been having a serious donut craving, as he got a bag full of donuts to take to the airport. The grease stain on the bag was immediately apparent, but he said they were tasty. He was fond of the cake donut and said he should have gotten more cake donuts, fewer raised donuts. Regardless, he ate them all. Greasy or not, they were surely better than anything sold at the airport!

The Winchell’s we visited is located at 10000 W. 44th Avenue in Wheat Ridge, Colorado. 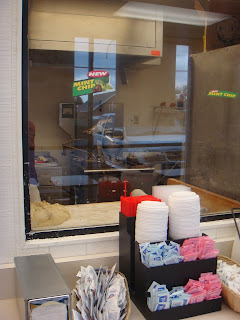